Chelan Fire and Rescue Board of Commissioners have called for a Special Meeting Thursday December 2, 2021.

Executive Session:  RCW 42.30.110(1)(g) To evaluate the qualifications of an applicant for public employment or to review the performance of a public employee. 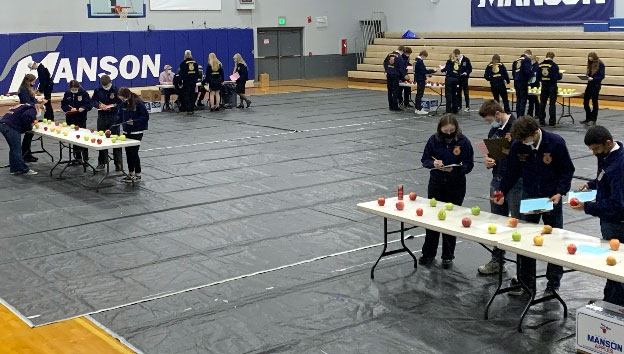 There were a total of 10 teams competing. The individuals had to Identify 20 bugs that deal with apple production, place two trays of golden and Red delicious apples, be able to identify varieties of apples, grade 25 red and golden delicious apples, identify defects that are associated with apples, properly pressure test apples and figure bloom date in front of the judges.

Manson Growers donated all the apples and the contest was set-up by field men Marty Cochran, and Nathan Coggins.

The state contest will be held in Yakima on December 8, 2021.

On November 17, 2021 at approximately 10:00 am Douglas County deputies were advised of an individual firing a handgun in a trailer park located in the 900 block of Maple Street, Bridgeport.

Prior to law enforcement arrival the individual was seen leaving the area in a passenger vehicle.

After initial investigation and search, deputies identified the individual shooting as Guadalupe C. Martinez, a 21 year old male of Bridgeport.

Guadalupe was arrested and booked without incident on charges of unlawful possession of a firearm and reckless endangerment.

Priority Projects lag far behind, particularly on the NPS end. The departure of key maintenance staff in early June, with replacement not yet occurring, coupled with pandemic related issues, resulted in approved projects like the rehabilitation of the fuel platform and garden fence not even getting off the ground. The good news, though, is prep work has begun in the past few weeks on the garden fence rehab in 2022.

On the bright side, the Buckner House cabinetry, funded by the Foundation ($3,500) and facilitated by NPS, is completed and looks amazing.

The John Deere riding mower donated to NPS by the Foundation,($2,085.42) and below budget, has been a huge asset this summer. Acquired in March, the mower has 95+ hours of mowing in the Orchard and other areas, making weed, fertilizer, and water management easier and more efficient. And, the Orchard looks great! Kudos's to Laurie and Nicole!

The Kiosk, a major interpretative and electrical project begun in 2019, then stalled for various reasons, is near completion. Budgeted at a cost of $11,000 by BHHF, it should be very close to, if not under budget. NPS interpretative information is scheduled for installation in May of 2022, if not sooner.

Music at the Orchard, in lieu of the Square Dance, made good use of the generator-free power! Thank you Agnes on Fire for making this happen. Attendance, 252!

Harvest Fest, in its limited format, was a success; with visitors and local residents providing a steady stream of pickers and pressers throughout the three days we provided all the materials for picking and making cider.

Those who chose to social distance were able to easily do so, a major goal for a far less formal Harvest Fest. We even tried some new things that will continue in future years. Placing boxes and picking bags under a canopy near the packing shed for nearly two weeks expedited picking, distancing, and distribution. About 125 empty cardboard boxes were used during that time, and picking bags were far easier to find and use.

Using cleaning materials acquired in 2020, no costs were incurred for Harvest Fest 2021. On the other hand, the second year without a raffle resulted in loss of income it generates.

Other small projects were completed utilizing volunteers, NPS and donated materials during the third quarter, and with no additional cost to the Foundation.

* Metal culvert ends were capped with wood as an aesthetic improvement.
* 28 wooden ditch gate boxes were constructed. (Thank you Phil Russell and Herb Sargo) Boxes may be installed in November.
*Lights and standards at the packing shed were upgraded significantly (Thank you Tom Courtney-welding, Phil and Libby Gans-poles, and Herb Sargo-tires and pipe)

Three Work Parties totaling 108 volunteer hours, were held June 17, July 17, and October 1. Unlike most years, thinning was not a major chore. Cleaning the main ditch along Buckner Lane and improving the path tread were a nice change for a warm July day. At the same time, others were literally painting a slurry of diatomaceous earth on tree trunks for ant control. Fuel reduction, nail pickup, picking apples, winterizing and more provided a variety of interesting tasks.

A Unusual Visitor joined the Canada Geese at the Orchard early this fall. An immature Greater White Fronted Goose was seen frequently with the Canada's at the Orchard, and was immediately noticeable by its smaller size and more aggressive feeding.

Not uncommon in migration east and west of the mountains, Greater White-Fronted Geese are usually in large flocks; so it is unusual that the goose was here alone and here in the Stehekin Valley. Interestingly, the bird was gone from the Orchard for a four-day period of time in late September, and a single immature GWFG was photographed at high alpine Cutthroat Lake during that time period. The same bird? Likely.

Planning ahead is the perfect recipe for stress free holiday travel 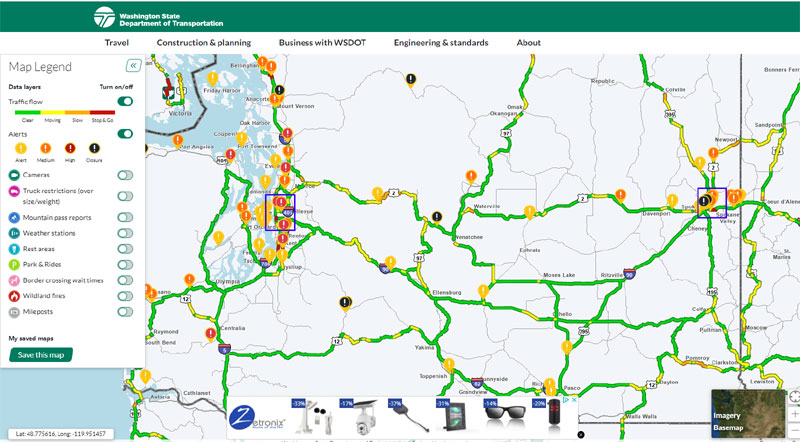 Please be prepared for winter weather this Thanksgiving weekend

OLYMPIA – Whether heading across the state or just across town this Thanksgiving weekend, there’s a good chance of encountering extra traffic and congestion. Which is why holiday travel prep is so important.

The Washington State Department of Transportation urges all travelers to “know before you go” and plan head for the busy holiday weekend. Staying informed throughout a trip also allows travelers to react to any winter weather, delays or other issues without missing the holiday feast or a big game.

This year, WSDOT is asking travelers to be especially prepared for winter travel as staffing challenges mean the agency may not be able to deliver the same level of service as in years past. Crews will absolutely still be out plowing roadways, but some roads may have snow or ice on them longer, some road or pass closures may last longer and some areas may not get plowed as often as in years past. Crews need the public’s help in preventing avoidable closures by ensuring vehicles have proper equipment and drivers are not going too fast for conditions.

WSDOT’s road work, as always, will be prioritized based on safety, resources and pre-existing plowing priority maps based on volume and/or critical roads.

Those traveling to the Friday, Nov. 26, Apple Cup football game in Seattle should prepare for possible winter weather on passes and allow extra time on Thursday evening or Friday morning as people make their way to the 5 p.m. game.

In the Puget Sound area, the SR 520 bridge and SR 99 tunnel will have weekend toll rates on Thanksgiving, Nov. 25, returning to weekday rates on Friday, Nov. 26. On the I-405 express toll lanes, travel is free for everyone on the Thanksgiving holiday, returning to normal toll and HOV requirements from 5 a.m. to 7 p.m. on Friday. Weekends are always free to travel in the express toll lanes.

People riding a state ferry should keep updated with the latest sailing schedules online as additional sailings may be added at a moment’s notice if there is adequate crewing.

The draft 2022-2025 STIP is a four-year program of multimodal transportation projects that have been identified through state, metropolitan, regional, tribal and local agency planning processes.

The STIP is developed annually by the Washington State Department of Transportation.  Projects that use Federal Highway Administration or Federal Transit Administration funds must be included in the STIP to authorize using the federal funds.

The comment period for the STIP is the final step of the community engagement process that began locally during development of individual transportation improvement programs. WSDOT will accept comments until 5 p.m. Wednesday, Dec. 15. Any comments received by WSDOT will be sent to the local agency, metropolitan or regional planning organization for their consideration.

The collaborative effort between WSDOT, local agencies, metropolitan and regional planning organizations ensures projects are consistent with local, regional and state long-range plans. Some county projects are not included in the draft STIP because state law requires counties to complete their transportation improvement programs by the end of the year; those projects are amended into the final STIP in January.

The current 2021-24 STIP can be viewed online and a similar, searchable database of the 2022-25 STIP will be created in January 2022, following FHWA and FTA approval.

Written comments can be sent to: Nancy Huntley or Steve Ahlsten, WSDOT, P.O. Box 47390, Olympia WA 98504-7390, or by email at This email address is being protected from spambots. You need JavaScript enabled to view it..

Free, temporary internet access is available to those who do not have broadband service in locations throughout the state. To find the nearest Drive-In WiFi Hotspot visit: www.commerce.wa.gov/building-infrastructure/washington-state-drive-in-wifi-hotspots-location-finder/.

Executive Session: RCW 42.30.110(1)(g) To evaluate the qualifications of an applicant for public employment or to review the performance of a public employee. 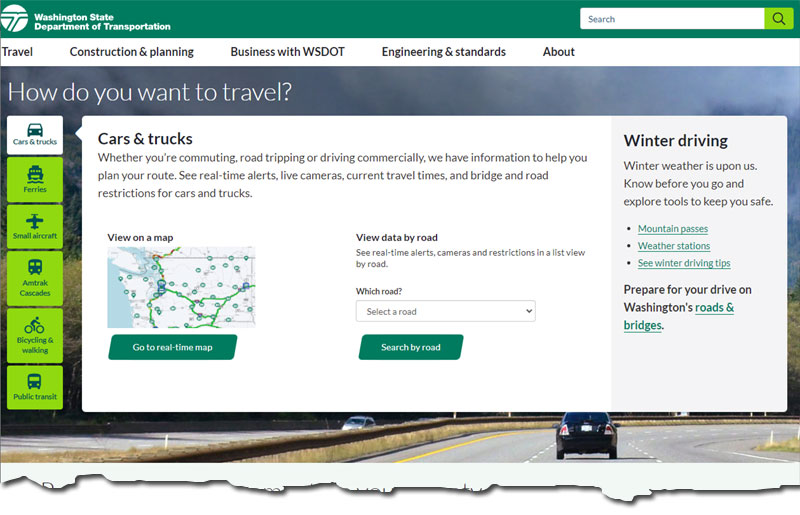 OLYMPIA – Visitors to the Washington State Department of Transportation’s website will notice a big difference in the site’s appearance today. The agency debuted an all-new website design yesterday, Sunday, Nov. 7, the first major overhaul in more than 15 years.

Although the name has stayed the same, www.wsdot.wa.gov is totally redesigned to focus on the needs of its 75,000 daily visitors. About 90 percent of the people who come to the website are looking for travel information, and more than 60 percent use a mobile device to access it. The new site is mobile and user-friendly with improvements for accessibility to serve everyone, on any device.

“Digital tools are more important than ever, and people have expectations for being able to find the information they need to complete a task quickly and easily,” said Secretary of Transportation Roger Millar. “We have worked hard to ensure our website meets those expectations and we’re excited to share this new cleaner, less cluttered and easier to use tool.”

The redesigned website prioritizes travel information and a key feature is the new Travel Center. No matter how one travels, information about road and traffic, ferry, weather, tolling, train, airport, bicycle and walking is available all in one place. The Travel Center allows customers to view information as a list or on a map.

WSDOT’s new website is a user-centered design, based on how customers organize content to make it easier for them to find. More than 20,000 website users, both internal and external, were engaged in the development of the website design. Usability tests were conducted throughout the redesign project, including website users who depend on assistive devices, to help WSDOT refine the site to better meet customer needs.

The Chelan Fire & Rescue Board of Commissioners will be holding two public meetings to garner input from the public and discuss the Proposed 2022 Budget.

These are open public meeting and we welcome your input either in person or via Zoom.

Dial by your location