A multi-agency coordination event occurred between Federal, State, County and City organizations in Grant County, Douglas County and Chelan County over the course of nine days in June. During this event, and through coordinated efforts, law enforcement officers arrested 62 Violent Offenders and others with warrants for their arrest. 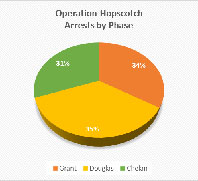 Craig Thayer, United States Marshal for the Eastern District of Washington, said, “The United States Marshals Service is very appreciative of the partnerships we have with the city, county, state, and other federal law enforcement agencies that worked diligently to make this warrant operation a tremendous success.  “Sixty -Two” violent offenders with active warrants were arrested and taken to jail.  Our communities are safer as a result of these cooperative efforts that help to hold these violent offenders accountable to the justice system.”

Harrington stated, “On behalf of the citizens of the Eastern District of Washington: Well Done!”

The U.S. Marshals Service led Pacific Northwest Violent Offender Task Force (“PNVOTF”) is comprised of federal, state, and local law enforcement officers from Washington, Oregon, and Alaska.  The PNVOTF in Eastern Washington is comprised of full-time members from the Yakima County Sheriff’s Office, Benton County Sheriff’s Office, Kennewick Police Department, Washington State Department of Corrections, and U.S. Border Patrol with part-time officers from agencies throughout the district.  The mission of the PNVOTF is to locate, arrest and bring to justice the most egregious federal, state, and local violent offenders.