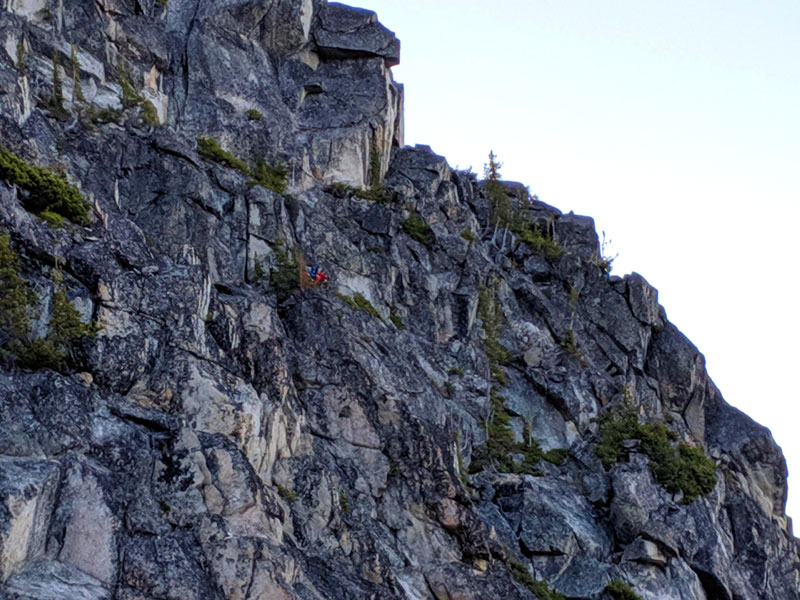 (Leavenworth, WA) Sheriff Brian Burnet reports a climber was rescued from the south aspect of Dragontail Peak on Sunday morning. The male subject had hiked and free climbed to an area on the mountain to a point at which he felt that he could not safely descend or ascend without assistance.

RIVERCOM dispatch received the initial 911 call from the subject at 7:52pm Saturday evening. Hezekiel Hinshaw 25-years of age of Olympia, WA stated he had hiked up the mountain and became, “Stuck on cliffs.” Hinshaw did not have a rope or other climbing gear. He told the Sheriff’s Office search and rescue coordinator he was not injured and had water, but the remainder of his gear was at his camp at Colchuck Lake. Hinshaw was told to stay put until a rescue team could make it to him.

Chelan County Mountain Rescue was contacted and a team of four responded Saturday evening to Colchuck Lake. At approximately 5:20am Sunday the team made it to an area below Hinshaw’s coordinates on the south of Dragontail Peak and had visual and verbal contact with him. Hinshaw had to be lowered via a rope system from the ledge he was on before the team could escort him out of the area. They arrived back at Colchuck Lake by noon Sunday and were back to the trailhead by 3:45pm.

Hinshaw told SAR coordinators he mistakenly got off course while descending the mountain and came to a steep cliff area where he could not figure a safe route out.