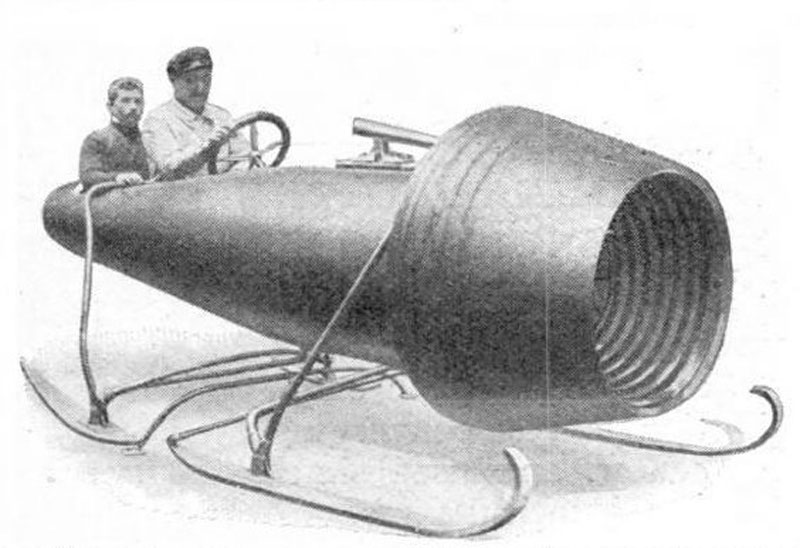 Photo by Unknown - https://books.google.co.uk/books?id=At4DAAAAMBAJ&pg=PA359Photograph and article appeared in Popular Mechanics of March 1911, no author or photographer listed., Public Domain, https://commons.wikimedia.org/w/index.php?curid=11767459

WENATCHEE, WA – The Chelan County Sheriff’s Office, in cooperation with the Washington State Parks and Recreation Commission and the Lake Wenatchee Recreation Club, is offering a free Snowmobile Safety Certification Class to young snowmobilers in December.

The key to safe snowmobiling lies in the operator’s knowledge, capabilities, limitations and understanding of the machine. It is recommended that snowmobilers be aware of weather and trail conditions and the safety of other winter sports enthusiasts, while respecting wildlife and the environment. The snowmobile safety course training includes:

Registration deadline is December 6th. A parent or guardian will need to sign a consent form for each child registered and sign them out at the conclusion of the class. For more information or to register, contact Deputy Rich Magnussen with the Chelan County Sheriff’s Office at (509) 667-6508 or email This email address is being protected from spambots. You need JavaScript enabled to view it. .

CRDTF received several recent complaints of suspected drug activity in the residence.  Through investigation, they were able to develop probable cause for the arrest of two 28 year old Wenatchee male residents for unlawful possession of a firearm.  The task force obtained a search warrant for the residence and for the arrest of the two subjects.

Due to the possibility of firearms in the residence and the potential number of occupants, it was determined the Chelan County Regional SWAT Team would be used initially to serve the warrant.  The two subjects named on the warrant were arrested and the residence was cleared without incident.  Three other occupants of the residence were taken into custody on arrest warrants as well.

Chelan Avenue was closed from Fifth Street to Second Street for approximately one hour while the residence was cleared and neighboring businesses were asked to shelter in place.

Sheriff Brian Burnett reports on October 23, 2018 at approximately 10:43 p.m., Chelan County Sheriff’s Deputies responded to the 12000 block of Chumstick Hwy, approximately four miles north of Leavenworth, for the report of a male subject firing a gun at co-workers.

Burlington Northern Santé Fe (BNSF) employees were attempting to access a railroad crossing construction site via a private driveway off of Chumstick Hwy.  The BNSF employees were in a large Freightliner truck and had utilized the driveway twice earlier in the day to access the work site.  They were confronted by a male subject, James Carl Brown, carrying an AR style rifle.  Brown advised the BNSF workers that they were on private property.  As they attempted to leave and drive back down the driveway towards Chumstick Hwy, Brown shouted for the group to stop, raised the rifle and fired 3-5 rounds into the ground in front of the truck.  They drove in reverse until James told them they were on BNSF right of way before James disappeared into the trees.

Fearing for their lives and not wanting to drive forward and unable to drive back down the driveway as the railroad crossing was completely torn up due to the construction, they radioed a co-worker who was approximately one mile south of their location.  The BNSF workers were eventually able to escape south on the railway by using a railroad machine via the rail line.

Chelan County Sheriff’s Deputies were able to establish phone contact with Brown.  Brown stated that Law Enforcement was not allowed on his property and refused to meet in person and would only talk on the phone.

Chelan County Regional SWAT was activated and utilized as negotiators continued to dialogue with Brown in an attempt for a peaceful conclusion.  Brown eventually stopped communicating with Chelan County Deputies but was later located by members of the SWAT team and taken into custody without incident.

Brown was booked into the Chelan County Regional Justice Center on (RCW 9A.36.011.1) Assault 1st Degree-assaults another with a firearm (four counts) and (RCW 9A.40.040) Unlawful Imprisonment (four counts).

Deputies responded and assisted in gathering mail from the roadway.  They have been assisting in returning mail to residents in the area.  This will continue into tomorrow as well.  At this point there is no suspect information.

The Sheriff’s office is asking the public for assistance in locating the suspect(s).  If you believe you have information to include surveillance video of the thefts, please contact the Sheriff’s Office tip-line at 509-667-6845.  You can also submit a tip at the Chelan County Sheriff’s Office website:  www.co.chelan.wa.us/sheriff/forms/submit-a-tip.

This is the time of year where valuable items are often sent through the mail.  It is important to protect yourself from mail theft for outgoing and incoming mail.  The US Postal Inspector recommends delivering valuable items through the slot at the post office or by handing it to the postal carrier.  For incoming mail, If you don’t receive an expected check or credit card, contact the issuing agency immediately.

There are many other suggestions for safeguarding your mail available at the US Postal Service Inspection website:  https://postalinspectors.uspis.gov/

NOTE:  If you are charged with mail theft, you could face up to five years in federal prison and fines of up to $250,000.

On 10/11/18 Wenatchee Police Officers responded to a suspicious call at the Holiday Lodge located in the 700 block of N. Wenatchee Ave. The caller reported that two males were acting suspicious around the property for several hours. Both suspects left the property before officers arrived.

The caller discovered that it appeared a couple of the hotel rooms had been entered and possibly a blanket was missing. The Holiday Lodge requested that officers contact the suspects and advise them to not return to their property.

During this contact officers noticed that the suspects had several items under some shrubs and Malone had a silver Apple Mac laptop in his possession. At this time both suspects were advised not to return to the Holiday Lodge.

After the officers left they spoke about the contact they had with Leonardo and Malone. Another officer advised that he took a vehicle prowl report on 10/10/18 where a silver Apple Mac was stolen. Officers returned to the area where Leonardo and Malone were contacted but they had left. Officers located items in the same shrubs which included items linked to several vehicle prowls and thefts that have been occurring the past several weeks.

Officers began checking pawn shops to see if the laptop had been pawned. At Pawn Fathers, located in the 500 block N. Wenatchee Avenue, employees stated a couple matching the description of Leonardo and Malone came in on 10/10/18 with two bikes to pawn. Officers looked at the bikes and they recognized one of them as recently reported stolen. Officers reviewed video footage at Pawn Fathers and identified Leonardo and Malone as the suspects who brought in the stolen bike. At the time the suspects brought in the bikes, Leonardo used identification that had been stolen during a vehicle prowl in Carson, WA.

The investigation into the vehicle prowls and theft is ongoing and officers have collected items of evidence from the suspects relating to several vehicle prowls that have been reported in Wenatchee.

On September 12th, 2018 at approximately 1:45 PM, a fire was reported in the dry grass in the front yard of a residence in the 1700 Block of Judkins Avenue in Wenatchee. The reporting party said they believed a male started the fire and gave a clothing description.

Chelan County Fire District 1 responded and extinguished the fire but not before it severely damaged a motorhome being used as a permanent dwelling. The motorhome was in close proximity to where the fire started and was occupied by three people at the time. All three were able to exit the motorhome without injury.

Deputies arrived on scene and observed a male nearby wearing clothing that matched the suspect description. He also had soot on his face under his eyes and on his nose that appeared to be purposefully applied. The male, a 41 year old Wenatchee resident was detained and later interviewed by Detectives.

After the male subject was interviewed by a CCSO detective, he was arrested and booked into CCRJC for Arson 1st Degree.

The search of the residence produced 2 illegally owned firearms and ammunition, an illegally owned silencer for a firearm, and 204.4 grams of methamphetamine. The Task Force seized 3 vehicles and $9,486.00 in cash.

Sara E. Mitchell (34) and Marco Palacios-Mora (31) were taken into custody for multiple counts of drug and gun related offenses.

Sheriff Brian Burnett reports an injured climber was rescued after suffering a fall on Liberty Bell Mountain Tuesday morning (08/28/2018). Benjamin Antonio (67yoa) of Yakima, WA was injured when a hand hold broke loose as he was climbing the Beckey’s Notch route along the northeast aspect of the mountain - approx. 7,000ft elevation.

According to a witness, Antonio’s rope system held, but he dropped about 10 – 15 feet before slamming into the side of the mountain causing hip and back injuries. Antonio’s climbing partner was eventually able to lower him to an area where he could be stabilized.

A climber in the area, activated a SPOT satellite beacon which initiated the notification to the International Emergency Rescue Coordination Center (IERCC) in Texas, and eventually to the Chelan County Sheriff’s Office Search and Rescue unit. Due to the texting capability of the satellite device, SAR coordinators were able to obtain information on Antonio’s injuries and position on the mountain.

A request was made through State Emergency Management for a hoist capable helicopter to respond to the incident and Chelan County Mountain Rescue personnel were put on standby. The first helicopter deployed to Liberty Bell Mountain was unable to conduct the rescues, so SAR coordinators contacted Naval Air Station Whidbey Island for a rescue response. NAS Whidbey launched a Blackhawk helicopter to the scene by 4:15pm and inserted a medic to Antonio’s location. The helicopter crew had to refuel prior to conducting a successful hoist extraction of Antonio from the mountain around 7:00pm. He was transported to Harborview Medical Center in Seattle, WA for treatment. As of Tuesday evening, his condition was stable.

Sheriff Brian Burnett would like the public notified about an attempted robbery and assault with a deadly weapon that occurred on Sunday, August 5th at shortly before 10:00pm.

The incident occurred near the intersection of South Wenatchee Avenue and the Malaga-Alcoa Highway, south of Boodry Street.

The two victims were working on their disabled vehicle at that location when they were contacted by a lone male subject. The male suspect grabbed one of the victims from behind, placed a knife to their throat and demanded money. After not getting any money the suspect released the one victim and then struck the other victim in the face with an unknown weapon, possibly the knife handle. The male suspect fled the location on foot.

A Sheriff Office canine capable of tracking criminal suspects was called in to assist, but was unsuccessful.

Both victims were treated and released from the Central Washington Hospital.

The Sheriff’s Office is actively working on identifying the suspect, but anyone with possible information is encouraged to call our tip line at 509-667-6845. The victim’s description of the suspect is as follows:

Tattoo on right side of the neck

Sheriff Brian Burnett is saddened to report on July 25, 2018 at approximately 6:30pm the Chelan County Sheriff’s responded to a vehicle versus bicyclist collision on Icicle Road near the intersection with Prowell Street in Leavenworth.

The bicyclist was a 9 year old female who was struck by a passing vehicle.

A Chelan County Deputy, who was responding to a different non-emergent call for service, witnessed the collision and immediately requested medical aid and additional Deputies. The Deputy then began life saving measures until relieved by responding medical aid units. Attempts to revive the child were unsuccessful.

An investigation was conducted last night and will continue today with the assistance of the Washington State Patrol. This is clearly a tragic event with multiple families affected. The driver of the vehicle did not show any signs of impairment.