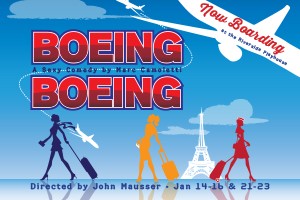 One of France’s most popular plays, this fast-paced 1960s romp is just the ticket to kick off a big year for Music Theatre of Wenatchee, which includes the return of the MTW Apple Blossom show, Mary Poppins, to the Numerica PAC.
Winner of the 2009 Tony Award for Best Revival of a Play, hilarious "Boeing Boeing" is a farce, focussed on Bernard, an American who’s devised a foolproof plan for keeping his love life in Paris exciting. He has three flight attendant fiancées and a bedroom for each. What could go wrong? Everything!
Eventually, Bernard and his American friend are left desperately seeking an emergency exit as his fiancées all come in for a landing at the same time.
The "Boeing Boeing" cast includes both MTW veterans and new faces, and director John Mausser says energy is "sky high," as Kevin McKee, Matthew Pippin, T.J. Farrell, Tiffany Mausser, Tess Davison and Becca Chambers surge headlong into hilarious hijinks.

Admission: Tickets at www.NumericaPAC.org or at (509) 663-ARTS • $15 regular admission • $12 for MTW members for Thursday performances