(Seattle)—The Washington State Patrol today unveiled the next-generation of breath testing instruments designed to help remove impaired drivers from the streets and highways we all share.

The Patrol has spent nearly four years making sure the Draeger Alcotest 9510 instruments would be ready to fit into an already effective program of DUI enforcement.

“This is another step in our agency’s long-standing effort to remove dangerously impaired drivers from our state’s highways,” said Chief John R. Batiste. “We’ve made great strides toward our goal of zero annual traffic fatalities, and this device will help move the needle even further.”

The Draeger instruments will replace the National Patent Analytical Systems DataMaster that has been in use since the 1980s. They are no longer being manufactured, and even getting parts has been difficult.

“The Draeger instrument will produce the same accurate results as our previous instrument, but with far less maintenance,” said Lt. Rob Sharpe, commander of the Patrol’s Impaired Driving Section. “They are also easier for officers to operate, and help speed the processing of DUI suspects.”

The biggest difference from previous generations of breath testing devices is that the Draegers utilize a dry gas standard instead of a liquid solution to verify that the instrument is working properly. For years, liquid solutions have had to be mixed locally by scientists, monitored for temperature, and checked regularly by technicians. The Draeger’s dry gas contains a known concentration of alcohol, allowing the instrument to verify that a suspect’s breath alcohol is being measured accurately and reliably. 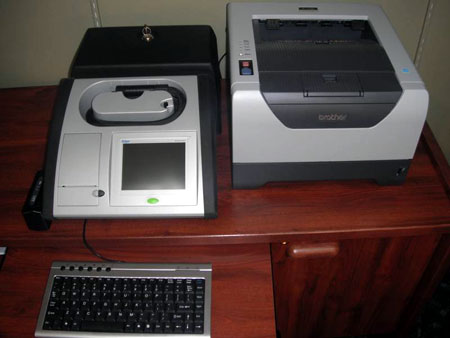 The Patrol received legislative approval in 2010 to switch to the dry gas and work began immediately so that the new instruments would fit into our state’s DUI program. The Patrol now believes the instruments are ready to win the confidence of judges and juries who will rely on them in court.

“The Draegers would have been fine right out of the box for simply testing breath alcohol levels,” Sharpe said. “We wanted to make them fit into our state’s DUI enforcement program so that officers can produce better reports, faster, and get back into service.”

One challenge in reducing impaired driving fatalities is the time it takes to process a DUI arrest. If that time can be shortened, police officers can get back on the road and spot additional impaired drivers.

As a result, a great deal of effort went into the user interface. For example, developers added drop-down menus that officers will be familiar with from using Microsoft Windows. In Washington, breath testing instruments also contain the state’s database of licensed drinking establishments, so troopers can include that information in their DUI report.

Ease of maintenance is also a big plus with the Draegers.

“If the device detects a problem, it shuts itself down and sends an e-mail to our office,” Sharpe said. “The test can’t proceed, and a technician can be dispatched to fix the problem.”

Technicians will also no longer need to make as many routine visits simply to check the status of the liquid solution used by the older instruments. When a Draeger unit’s tank of dry gas starts to run low, it sends an e-mail alert.

The Patrol expects to begin deploying the new Draeger instruments in time for the December holiday season. The first instruments will be deployed in Whatcom, Island, San Juan, Skagit and Snohomish counties. The Patrol owns and maintains all the state’s breath testing instruments used by police for DUI enforcement.

In 2013, 440 people were killed in traffic collisions. Of those deaths, 188 involved a driver who was impaired. Washington’s Strategic Highway Safety Plan is called “Target Zero,” and aims to completely eliminate all traffic fatalities by the year 2030.