The American Legion was founded in 1919 on four pillars: Veterans Affairs and Rehabilitation, National Security, Americanism, and Children and Youth. Each of these pillars encompasses a variety of programs that benefit our nation’s veterans, its service members, their families, the youth of America and ordinary citizens.

On January 13 the Manson American Legion, Post 108 made special presentations of two 4x6 foot American flags, one for Manson High and the second Manson Elementary, addressing two of the four pillars. Post 108 was recognized in 2019 by the Manson Chamber of Commerce with a Community Recognition Award for their assistance in the Lake Chelan Valley, helping youth and programs in our community. 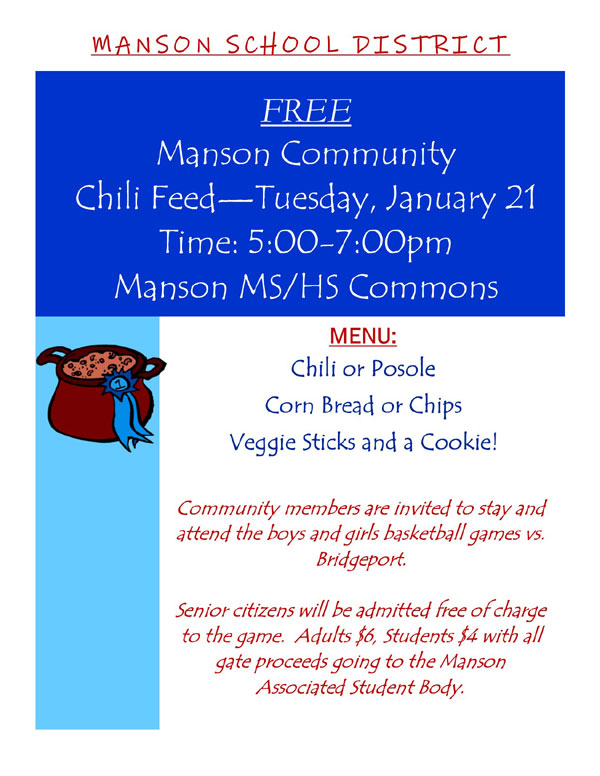 In search of a Head Coach to build the program

Manson High School is launching a coed high school tennis team in the spring of 2020.  In the fall of 2019 the district met with parents, students and community members to determine the viability of a tennis program and found strong interest from all parties. “At least 20 students have indicated strong interest in the program” said Athletic Director Eric Sivertson.   The district is very excited to partner with Harmony Meadows as our home court.

The next step in launching the program is hiring a Head Coach.  In discussing the program in the community we have identified a number of individuals willing to help with the program or even be assistant coaches, but at this time we have not found our Head Coach. We are looking for an energetic leader that can help us recruit student athletes into the program and can also teach the fundamentals of tennis.  If interested, please complete an application packet at www.manson.org

If you have questions about the position contact Eric Sivertson at 509-687-3140 or email me at This email address is being protected from spambots. You need JavaScript enabled to view it.. 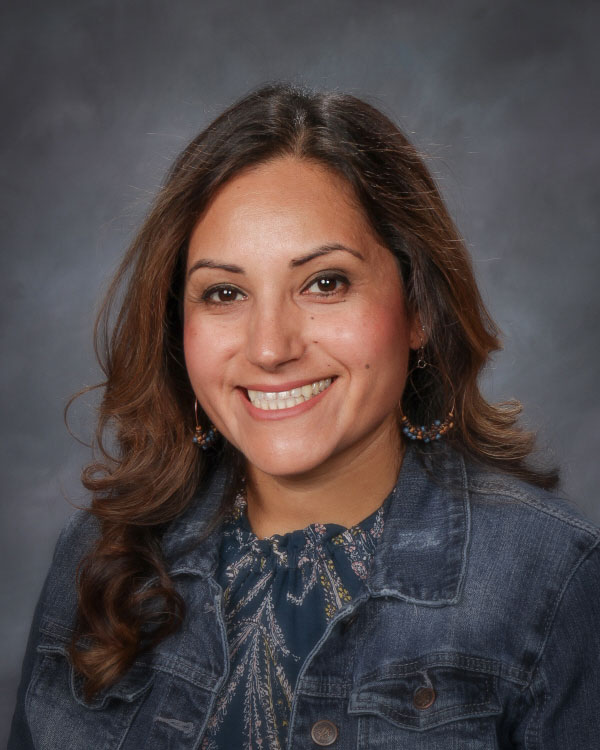 Manson High School Post-Secondary Coordinator Addie Grageda could not be more proud of the Internship Program she leads.

Ms. Grageda recently learned her efforts to renew and expand a grant from a private non-profit foundation, The Discuren Foundation, has been awarded.

Manson School District will receive $177,000 in funds over the next three years to provide valuable opportunities to high school students. The funding will also expand the program and allow middle school students to participate in training and career activities.

Addie shared “one of my favorite things is hearing the senior students speak of their internships experiences at their senior presentations and tell their families, friends and teachers how it has helped them discover a career path they would like to pursue, as well as given them an opportunity to meet someone in our community that has motivated them to follow their dreams.”

These programs would not be possible without the support of individuals, businesses and agencies in our Valley. The partnership in providing authentic career experiences to students and future employees to businesses is truly a “win-win.”

Javes Escalera, Director of Marketing at Coldwell Banker LCP shared “As an alum from Manson High School (class of 2014), I can first-hand say that it would have improved my awareness of the career path that I wanted to take if I had the opportunity to have had an internship. It’s easy to get the education you need, but it’s equally important to understand what you’re working towards. And that’s what internships are, the application of everything you’ve learned in a hands-on setting.” 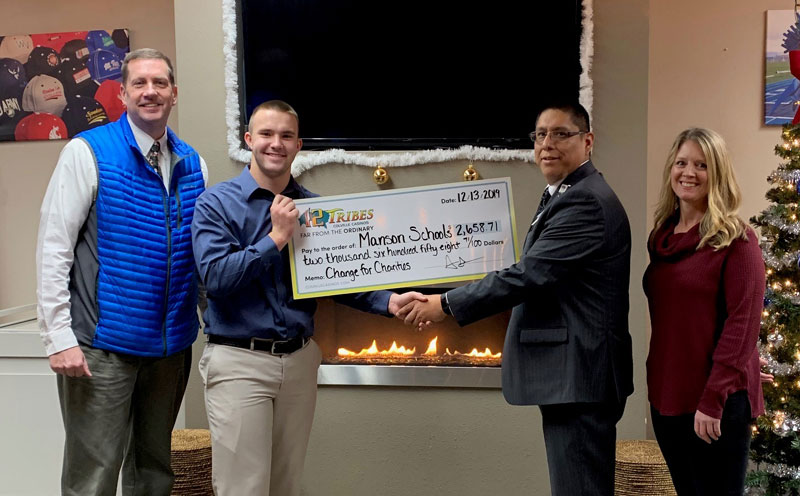 Manson School District was the lucky recipient of the “Change for Charities” program sponsored through 12 Tribes Colville Casinos.

This donation will be used with the intention to help students to participate in extra-curricular, clubs, field trips/camps etc. where fees or equipment might prevent them from doing so. These funds will be available for student’s kindergarten through 12th grade. 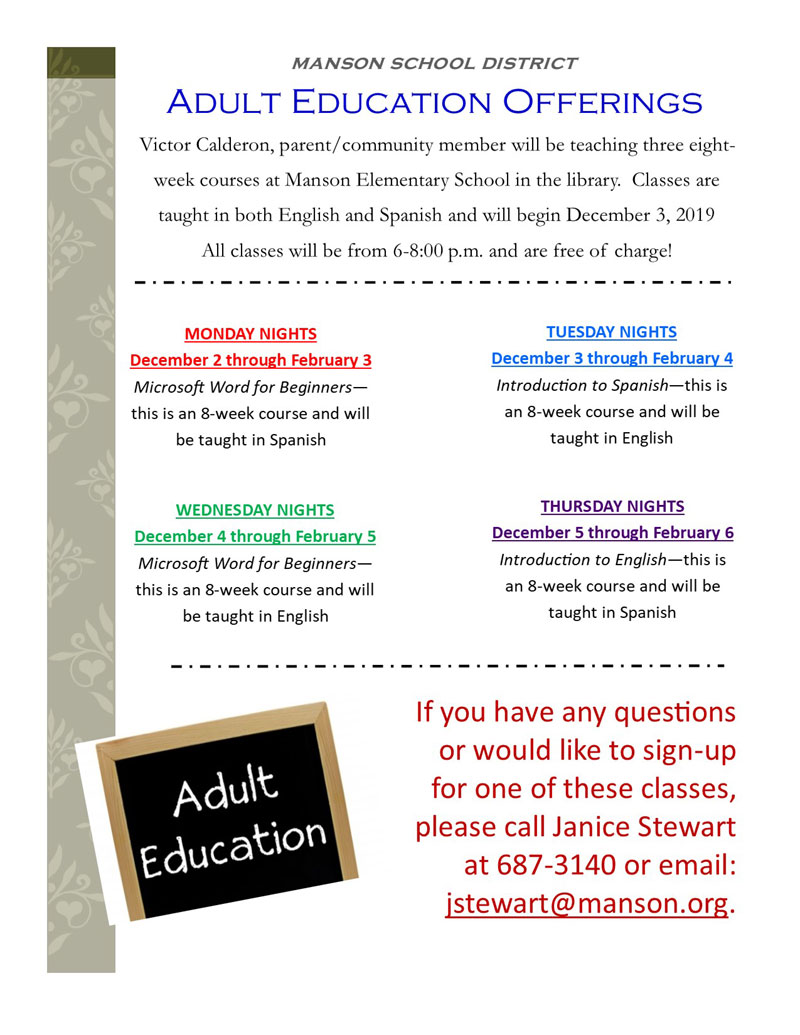 The Manson Grange was the site of the District #7 FFA Apple Judging Career Development Event (CDE). There were over 88 contestants from 19 area schools. The contest was put on by Marty Cochran with help from Nathan Coggins, Travis Schoenwald, Devon Griffith, and Carol Peters. Each

A big “THANK YOU” to Manson Growers for suppling us with all the apples for this year’s contest. 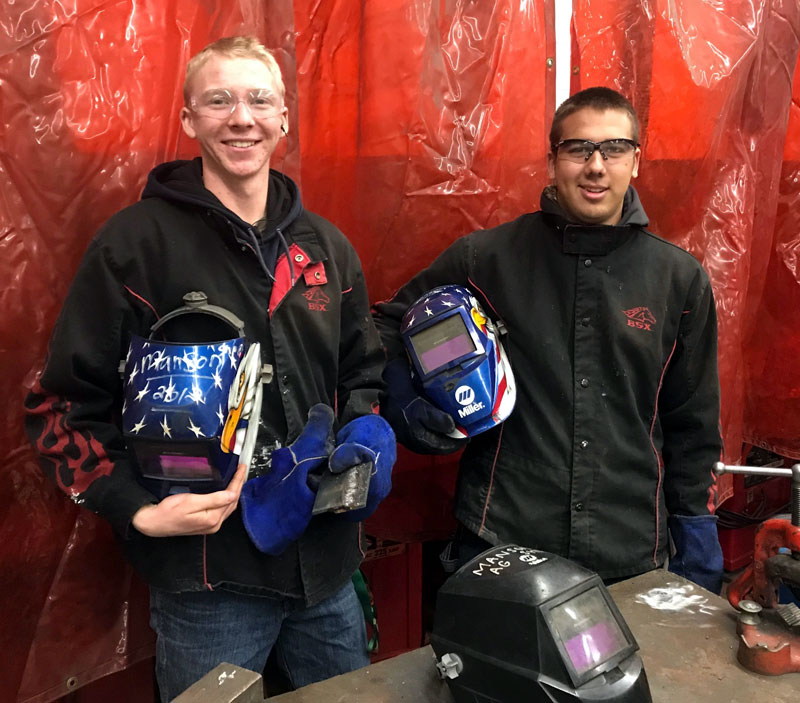 The Manson FFA apple judging team along with the shop team travelled to Tonasket to compete against other schools in two fields.

Manson will host the next competition on November 19 at the Manson Grange.

Manson shop students will be host their next contest on Dec 18th.

Many activities were held at Manson elementary, middle and high schools on Friday, November 8th!

The day got off to a great start by honoring our veterans with a special breakfast of pancakes, bacon and eggs and a perfect cup of coffee all prepared and served by Manson high school students. Assemblies were also held at both schools where many veterans were in attendance. Students had an opportunity to thank each Veteran with a hand shake and a hello!

During this month of honoring our Veterans, a school-wide Penny War was also going on to benefit our friends at the Tatley Outpost build 3 tiny homes on their Veteran run farm. The class that earned the most gets to take a field trip to the farm, do some yoga therapy, do some work and help with the tiny home project. A total of $2,125.17 was collected by all our students. As a nice surprise, local business “Chelan Fresh” also donated $1,000 to Tatley Outpost making the total donation of $3,135.17.

Thank you for your service Veterans!

All local veterans are cordially invited to attend a breakfast in their honor on Friday, November 8 beginning at 8:30 a.m. at Manson High School in the student center.

Students will be preparing and serving pancakes, eggs, bacon and coffee.

Please join us as we honor those who have served.