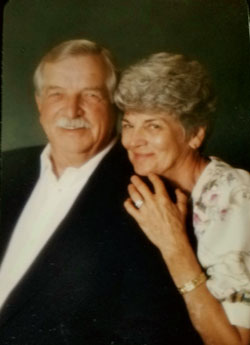 Many of us have pondered what influence our lives will have on future generations. Long time Manson residents, Ted and Nicki Leffler, quietly took steps to insure they could positively impact future generations in the communities they loved. In 1993, they created a charitable trust to be equally distributed to three school districts: Chester High School in Chester, Montana (Nicki’s school); Maries County Belle High School in Belle, Missouri (Ted’s school) and Manson High School in Manson, Washington. Upon Ted’s death in 2003 and Nicki’s passing in 2016, the trust funds were transferred to the successor trustee named in the original trust, Superintendent of Manson School District.

The Leffler’s generous actions twenty-five years ago resulted in the development of scholarship trust funds in all three school districts with each receiving more than $200,000 in trust funds. These endowment funds are to be held in “perpetuity” and used for graduating high school seniors from each district with only the interest/earnings on the principle amount to be used each year. In doing so, the original trust amount will stay intact and students one hundred years from now will still benefit.

Manson School District is working with family member Heidi Leffler (daughter) to create the Ted and Nicki Leffler Memorial Scholarship. We’ve learned Ted Leffler had several careers in a variety of fields, but a majority of his work centered on electrical power infrastructure. His career took him from Missouri to Montana (where he met and married Nicki) to Oregon, Idaho, California and even New York. He took great pride in his work and was an innovator in his field. Ted is credited with being one of the first to utilize helicopters to string powerlines and he estimated he had a hand in stringing 60% of the Northwest’s power grid. It’s clear Ted understood the value of skilled labor; Manson’s scholarships will encourage students pursuing post-high school careers or technical training/education to apply.

Scholarship applications will be posted in January and a committee comprised of Manson community members will select winner(s) who will be announced at the June 5th 2018 Senior Awards Ceremony.