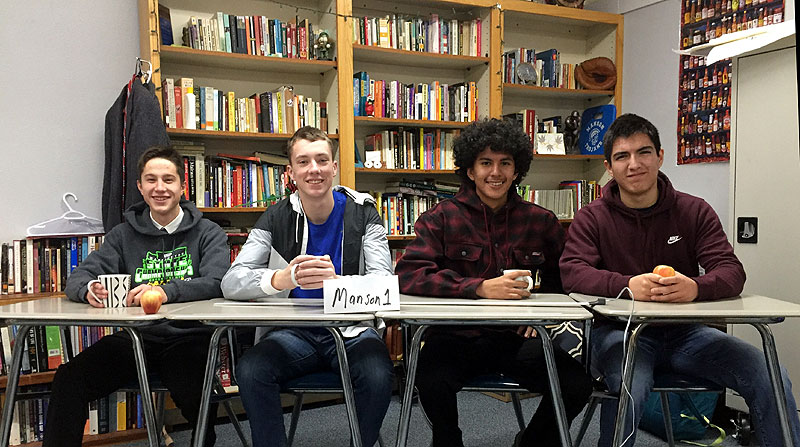 On Wednesday January 9th, Manson High School hosted their annual Knowledge Bowl (KB) Tournament.  “Typically, we have the northern region teams (e.g. Liberty Bell, Chelan, Okanogan, etc.) coming down to participate in the competition, but this year we had a huge turn out from the south too,” said Manson coach Phil Fournier.  With the southern tournament being cancelled last minute at Wahluke High School, there was a convergence of the southern and northern teams onto the Manson campus, a veritable North Central Washington (NCW) Knowledge Bowl Tournament. There were 11 schools and 29 teams, ranging from 4A to 2B battling it out.

With the strong reputation of the intellectual acumen and friendly competitiveness of the NCW region and teams, the battles were intense and well fought.  Liberty Bell, a perennial favorite at State, took 1st place honors while Moses Lake, another juggernaut in State competition, took 2nd place. Manson took 13th place overall in this highly competitive field. Manson High School captain Ty Charlton enjoyed the competition and organization of the event. “It was bigger than previous years.  It ran smoothly and everyone had a good time.”  In between rounds, the various teams congregated to the student hub to check their results and fill up on some snacks and small conversation while a nice warm fire crackled in the background.

The Manson High School Knowledge Bowl team would like to thank the school district and community for the great success of this tournament: the use of teachers’ classrooms, the technological assistance and equipment, the dedication of our incredible readers and timers, and the gracious donations from Manson Red Apple and Manson Growers.   Coach Fournier added, “It was wonderful having Knowledge Bowl coaches from the various schools share with me about how great the tournament was and also about the amazing commitment of all community and staff members involved in this huge endeavor. It was a blast.”