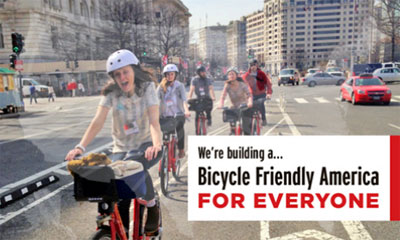 OLYMPIA – Pedal power is still strong in Washington as the League of American Bicyclists once again ranks the state as No. 1 “Bicycle Friendly State in America.” Washington has been a leader in the nation for every year since 2008 when the League began its program.

“Our efforts to support bicycling in Washington through our policies and investments is clearly paying off,” said Gov. Jay Inslee. “As a state we have invested in Safe Routes to School for a healthier next generation and in a transportation system that supports safer biking and walking mobility options for Washingtonians. I appreciate the work of our Bicycle Friendly communities, businesses and universities that have all contributed to building active, healthy transportation options.”

Each state is ranked based on its score in five categories: Infrastructure and Funding; Education and Encouragement; Legislation and Enforcement; Policies and Programs; Evaluation and Planning; and, Discretionary Scoring.

“It’s great to once again lead the nation in recognizing that bicycling is an important part of a multimodal transportation system,” said Secretary of Transportation Roger Millar. “We’re committed to providing transportation choices for all users of the system – including people who bike and walk. We have more work to do, but this ranking affirms that we’re on the right path.”

The League credited Washington for passage of its 16-year Connecting Washington funding package, including more than $20 million per year for bicycling and walking projects. It also noted Washington State Department of Transportation’s creation of the new, statewide Active Transportation Division as another reason why the state has retained its spot as a national leader in improving conditions for people who bike and walk.