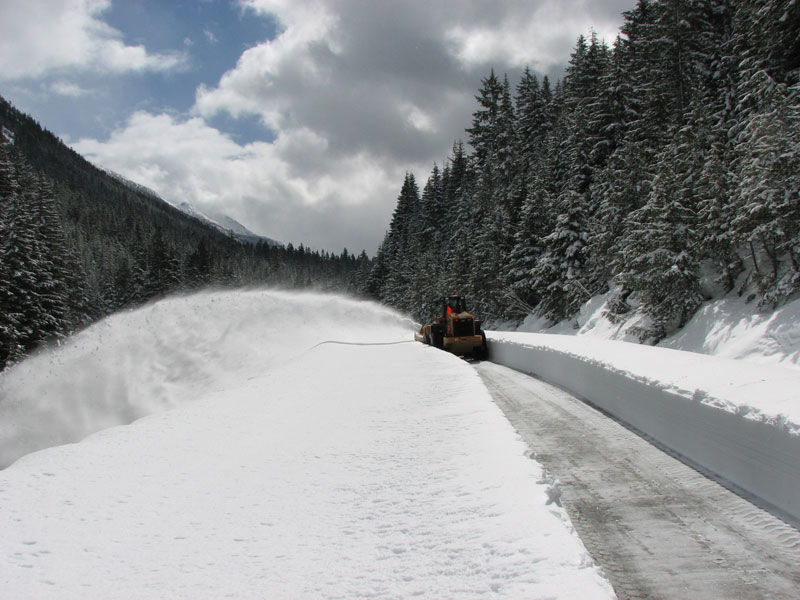 DIABLO – Forget about that groundhog. A sure sign of spring in the Pacific Northwest is the announcement that the clearing of 37 miles of State Route 20 connecting the Skagit and Methow valleys began yesterday, Monday, March 25.

Washington State Department of Transportation’s west side maintenance crew began clearing the scenic highway from Colonial Creek to the Ross Lake Overlook at Diablo Gate on Monday. From the east side, crews cleared from Early Winters up 7 miles to Silver Star Gate – and kept going.  By mid-morning Tuesday, March 26, crews cleared one lane for an additional 7 miles to Lone Fir (campground).

The barricades will remain in place at Early Winters because crews will need to remove some trees that pose a danger to travelers before it’s safe to allow people beyond the gate.

The crews expect to meet between Rainy and Washington passes within four to six weeks. The work can take longer if there is late spring snow or move more quickly if warmer temperatures accelerate snowmelt.

Once crews clear the snow, they will make necessary repairs to the highway, including guardrails, signs, stripes and pavement patches. Only then can the gates open to travelers.  The reopening will provide:

Public access between the closure gates is allowed during the winter months but during the Monday through Thursday clearing process, that space is a legal work zone closed to the public due to the heavy equipment used in the clearing.