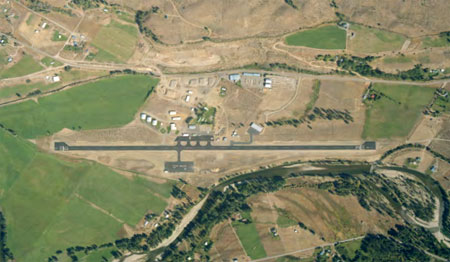 WINTHROP – Pilots will have access to an updated tie down area after Methow Valley State Airport gets its long-awaited apron layout expansion. Work starts May 28 with plans for new spaces to open after approximately 30 days.

Visiting pilots will not encounter any delays or runway closures while using the airport during the construction. However, pilots should still regularly check Notices to Airmen.

This update will also expand this airport’s apron into compliance with Federal Aviation Administration’s (FAA) design standards. This expansion adds three additional parking positions designed for the critical design aircraft. There will be 54.49 foot spacing between tie down points and seven more parking positions for smaller aircraft with 34 foot spacing between tie down points. Some of the new tie downs will better accommodate aircraft with wingspans in the typical range of 30 – 38 feet.

The spacing of tie down points for smaller aircraft was one of the highlighted issues after the completion of last year’s $5 million pavement rehabilitation project at the airport. This project was originally intended to be included as part of last year’s pavement rehabilitation work, but due to availability and timing of federal funding, the apron expansion was be re-bid in Fall 2018 for construction this Spring/Summer 2019.

The contract was awarded to Wenatchee general contractor, Selland Construction, in the amount of $1.26 million.

Construction costs are split between the FAA Airport Improvement Program and Washington State Department of Transportation Aviation. The FAA is supporting 90 percent and WSDOT Aviation is supporting 10 percent of the total cost.

The project was designed by Denver based engineering firm Jviation, who will also provide construction management services during the project