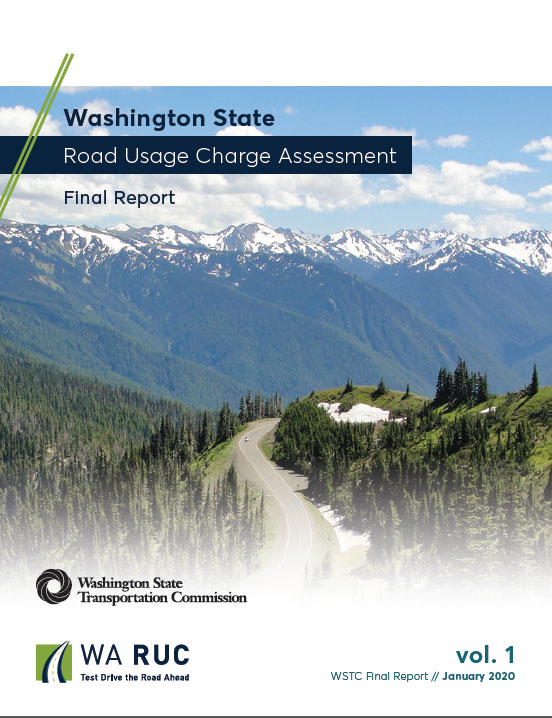 In collaboration with the Washington Road Usage Charge Steering Committee, the WSTC’S report includes analysis and findings of the legal, fiscal, operational, and policy impacts of a road usage charge and provides recommendations and options on how RUC could be implemented in Washington.

The state legislature will ultimately decide if a road usage charge will be implemented in Washington. Should the Legislature move forward with a road usage charge, it must consider several key topics, all of which the commission’s final report addressed. Those include how to: gradually transition to a RUC system, determine what vehicles should be subject to paying a RUC, determine the per-mile rate policy, set forth the allowable use of RUC revenue, and determine details around how a RUC program would be implemented.

“We thank the steering committee and volunteer pilot project participants for contributing to years of research and analysis on this innovative transportation funding policy,” said Jerry Litt, chair of the Washington State Transportation Commission. “We believe road usage charging is a promising and viable option for Washington, and we look forward to having the Legislature consider a gradual but necessary transition away from relying on the consumption of fossil fuel to fund our roads.”

The 29-member Road Usage Charge Steering Committee has guided Washington’s assessment of road usage charging since 2012. The committee supported and advised on the development of the RUC pilot project and submitted its final report on its road usage charging findings to the commission in October 2019. Based upon the findings of the steering committee, the commission determined its final set of recommendations and their final report, which details the results of the 7-year-long assessment of road usage charging. It includes the 12-month-long test drive portion of the pilot project that involved more than 2,000 statewide drivers who logged 15 million miles from February 2018 to January 2019.

As vehicles become more fuel-efficient or switch to electric power, gas tax revenue is expected to decline by as much as 45 percent by 2035. In 2012, the Legislature directed the commission to assess the potential of a road usage charge to replace the gas tax. A road usage charge is a per-mile charge drivers would pay for the use of the roads, as opposed to paying by the gallon of gas.