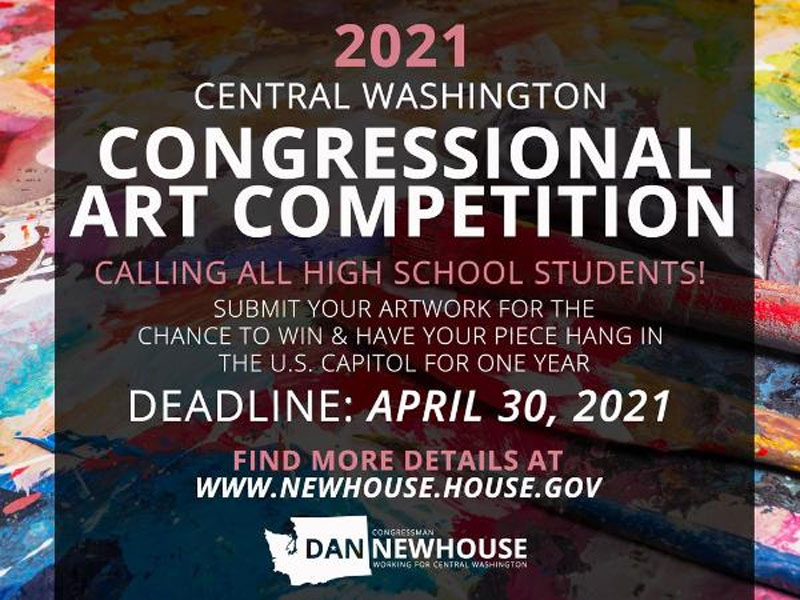 I am proud to announce the start of the annual Central Washington Congressional Art Competition!

This is an excellent opportunity to recognize young artists across the nation, and I encourage every high school student in our district with an interest in painting, sketching, photography, or a variety of other art techniques to enter. Year after year, I am impressed by the talents of Central Washington’s young people, and I know this year will be the same.

All entries must be submitted to one of my District offices by April 30.

The winning entry will be displayed in the U.S. Capitol for one year, and the runner up pieces will hang in each of my district offices.

If you know a high school student in Washington’s 4th Congressional District who may be interested, I encourage you to share this opportunity with them. Please feel free to reach out to my office for more details at (202) 225-5816.

Find more rules, regulations, and how to submit your artwork to the Central Washington Congressional Art Competition on my website. 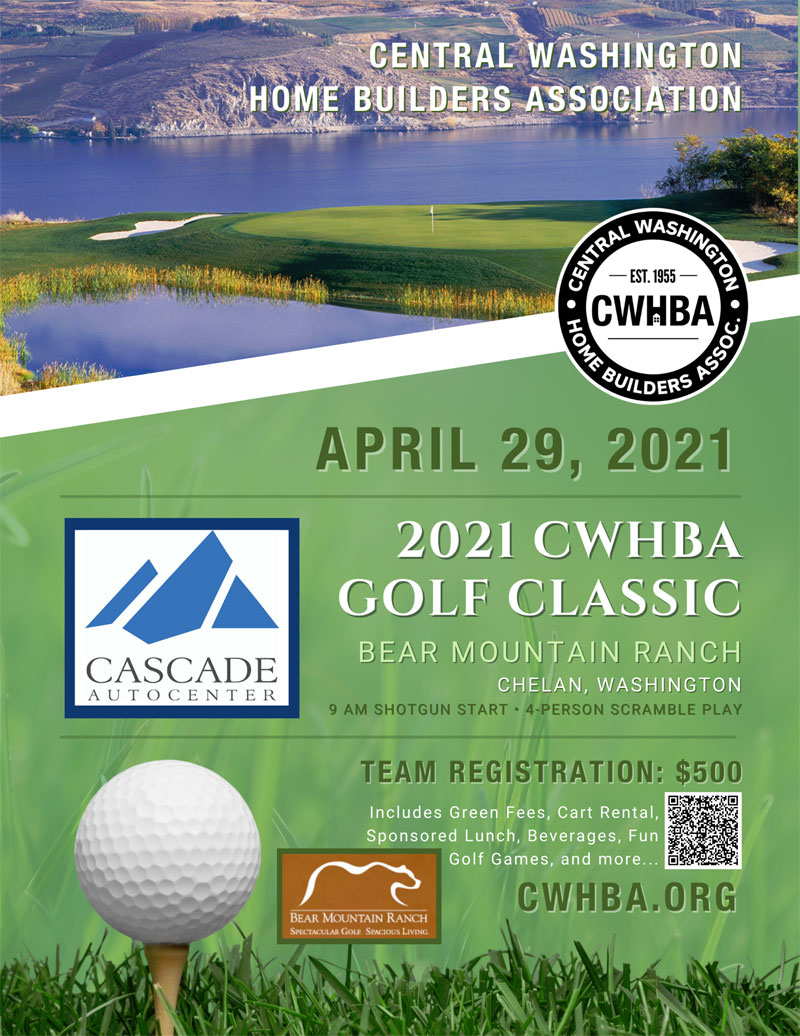 Grab your clubs and spend a day on the course during this FUN MEMBER OUTING. It's a wonderful opportunity for members to get together for a little friendly competition, promote your company’s products & services, and build new relationships.

9am - shotgun start followed by lunch and awards. 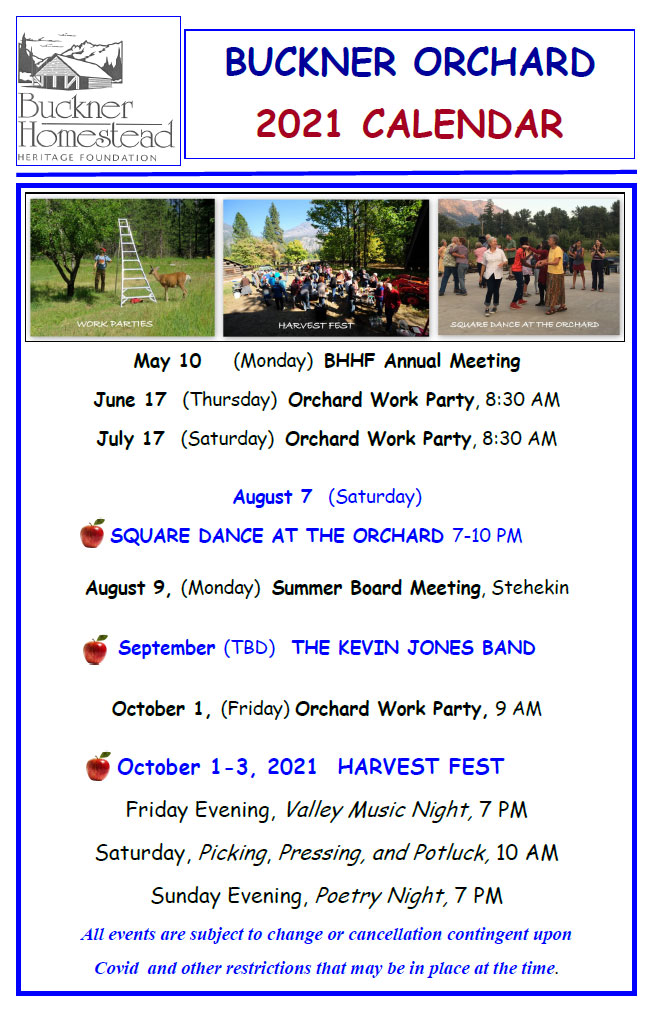 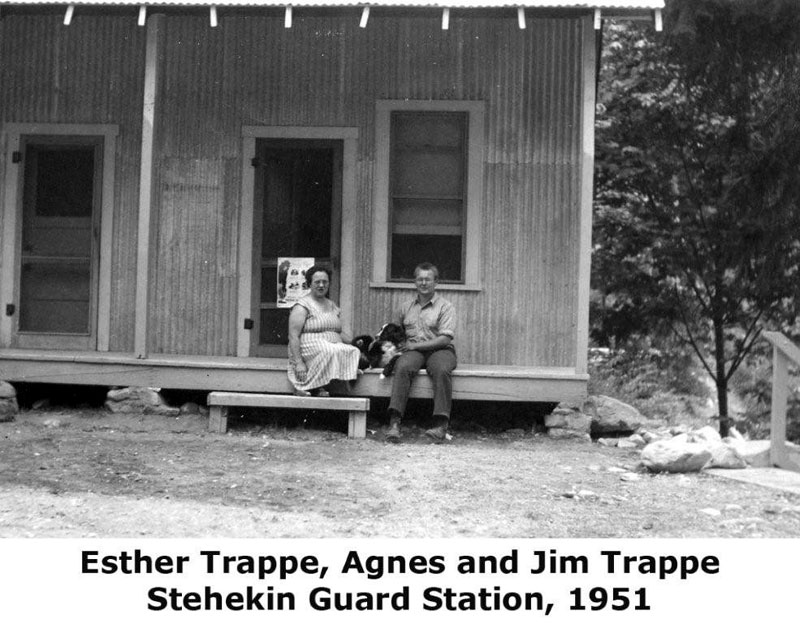 Supporting the Orchard - It Is Personal
A year ago, I shared my realization that support for the Buckner Orchard is truly personal.  For me, it was easy; Harry Buckner was my grandfather, we lived in the Buzzard Cabin until I was six, and the connections and personal experiences grew from there.
We all have our own experiences that make the Buckner Orchard meaningful and personal.  Most are as simple as enjoying the location, the peace and tranquility, the history and beauty, or appreciating the wonderful Common Delicious apples.
Below, Jim Trappe, Corvallis, OR, professor emeritus at Oregon State University, and a BHHF Board member, shares his own story of how, in 1947, a 15 year-old boy from Spokane came to call the Buckner Ranch his home.  Many of you know Jim; the mushroom guy, story teller extraordinaire, long-time "Orchard groupie," and friend.
Please join us today in supporting the Buckner Orchard, helping ensure that we and future generations, have the opportunity to create our own personal experiences and memories!  If you missed it, our 2020 ANNUAL REPORT provides a great picture of what the Foundation does to support the Orchard. (You'll find the needed membership information immediately following Jim's reflections.)
Herb Sargo
BHHF President
Why Supporting the Buckner Orchard is Personal to Me
Jim Trappe, February 2021

Like Herb, it’s easy for me to reflect on my time at the Buckner Ranch. Harry’s youngest daughter, Bucky, was a student at WSU at Pullman, and in 1947 Harry wrote to her to recruit 5 or 6 of her college chums to thin the heavy crop set of apples. My older sister agreed to come and asked if her little brother Jimmy could also come. I was 15, and Harry’s nephew, Bud Gills, also 15, was coming as well. Harry thought it would work well for us two boys to defend ourselves from all those college girls.

We boys stayed in the loft of the new shop by the Buzzard cabin. We all had a great time thinning apples and enjoying weekends exploring, swimming, goofing off, pestering the girls, and helping Herbie’s Dad build their new house down by the river. Bucky took us all to climb Mt. McGregor. I was a city boy (Spokane) and I loved it all.

We were done thinning apples in early July, so we all prepared to leave. But I asked Harry if I could stay the rest of summer and work for room and board. That was fine for him, his wife Olive and my folks. My jobs were to keep the firewood boxes filled, milk the two cows, (Yes, Harry taught me how, including how to aim a teat to squirt a stream of milk to the barn cats who lapped it out of the air), turn the cows out pasture and bring them in for evening milking and feeding them some hay, helping Herb’s dad Tony to cut, haul and split firewood, take the red ford truck(now retired and siting in front of the house) to Maxwell’s hay field and load the cut hay to take back to the farm, and all kinds of other chores. Harry worked me hard, I thought too hard for just room and board, but a deal’s a deal and it was my idea, so I couldn’t complain. He and Olive were my “summer parents” and treated me so well!

Came the time to go back to Spokane for school (I had turned 16), I awaited Harry in the living room, packed and ready to be taken to the boat. Harry handed me a piece of paper:  a check for $500!!!!   I was puzzled, and he said “Well, Jim I intended to pay you and  you've  worked hard, but I didn’t tell you because you might go to the landing on weekends and splurge it all on Beryl’s hamburgers and Washington Nut pie. Instead, I want you to put it in the bank for college.” I was speechless! That was a fortune in 1946.

I worked all the next summer for Harry, Olive had died, so there was just the two of us in the house. Once in a while Herb’s parents,Tony and Irene, would visit friends for dinner, so I would toddler-sit little Herbie and his littler brother Chris.

While attending the University of Washington, I would often visit the Buckner Ranch during winter vacation.  Summers working trail crew or recreation guard at Stehekin kept me in Stehekin for more summers.   And, I’ve been coming back  several times a year ever since.  It’s my second home.

RENEWAL - Your check, made out to the Buckner Homestead Heritage Foundation (BHHF), should be mailed to PO Box 184, Manson, WA  98831.  As a renewal, we will have your information on file.  Please include your e-mail address, as this is how we receipt and communicate with members in a cost-effective manner.   And, your contribution is tax deductible as allowed by the IRS.

NEW MEMBERSHIP -  CLICK HERE to download a membership form to print and mail to PO Box 184, Manson, WA  98831.  Again, be sure to include your e-mail address.

Another form of support for the Homestead and Orchard is a donation. Monetary donations may be for a specific purpose or as a non-specific donation to the Foundation.

Series of thefts lead to arrests

On 2/22/2021, the East Wenatchee Police responded to a report of vehicle prowl in the 900 block of 11th Street NE. The victim’s purse had been stolen. The purse contained a credit card which had now been used at three businesses in East Wenatchee. The total amount for the items purchased with the stolen credit card was approximately $280. During their investigation, East Wenatchee Officers obtained video surveillance from two of the businesses where two different suspects were observed purchasing items with the stolen credit card. Images from these videos were placed on our social media.

On 2/26/2021, East Wenatchee Police Officers responded to a theft at the Buckle clothing store located inside of the Wenatchee Valley Mall. In this incident, a male suspect had walked out of the store with $720 worth of jeans. When store employees told the male to stop, he responded with “touch me and I’ll sue.” Employees followed the male to his vehicle and obtained photographs of the suspect vehicle before he departed.

On 2/27/2021, an East Wenatchee Police Officer was on an unrelated traffic stop in the Safeway parking lot when they observed the suspect vehicle involved in the Buckle theft. At this time, it had already been determined the individuals associated with this vehicle were also involved in thefts in Douglas County and the City of Wenatchee.

The suspects were arrested without incident and vehicle was impounded until a search warrant could be obtained. On 03/1/2021, East Wenatchee Police Officers served a search warrant on the suspect vehicle. Evidence from 6 local cases and 2 out of the area vehicle prowls was located in the vehicle, along with drug paraphernalia to include syringes loaded with a liquid believed to be a narcotic drug. The suspects are believed to have ties to the Moses Lake area. This investigation is ongoing.

A Different, but Productive Year!

CLICK HERE for the 2020 Annual Report in pdf format

On Tuesday February 9, 2021 the East Wenatchee Police Department Investigative Unit received a phone call from the Internet Crimes Against Children Task Force (ICAC). ICAC reported they had been alerted to what was believed to be images depicting minors engaged in sexually explicit conduct that were newly produced. Utilizing information provided by the ICAC, Detectives were able to identify the local IP Address being used along with the identification of the suspect.

Based off the information gathered by the East Wenatchee Police Department Investigative Unit, and the ICAC a search warrant was sought and granted for a residence in the 100 Block of North Kansas Ave, in East Wenatchee. In the morning hours on Friday February 19, 2021, the East Wenatchee Police Department served the search warrant on this residence. The suspect was home at the time of the search warrant and was taken into custody. A search of the residence was completed and multiple electronic items and devices capable of storing media were seized as evidence. The suspect was booked into Chelan County Regional Justice Center on fifteen counts of Possession of Minors Engaged in Sexually Explicit Conduct. This investigation is ongoing.

"Sleigh of Love" in downtown Manson next to Troy's Pizza

The Manson Chamber of Commerce has set up the "Sleigh of Love" in downtown Manson next to Troy's Pizza.

Norm Manly has volunteered his time on Thursday through Saturday, February 11-13 to take photos of you and your sweetheart.

Norm plans to be available from 12:00 to 2:00 each day. Photos will be uploaded to the Manson Chamber of Commerce's Facebook page so you can share your love with the world!

If you do not want your photo on the Internet, Norm will be happy to take a photo with your camera.

One more option is to take a photo and email it to Norm at This email address is being protected from spambots. You need JavaScript enabled to view it. and he will upload it for you. If you are willing, share your names and where you are from.

The sleigh will be disinfected between photos. 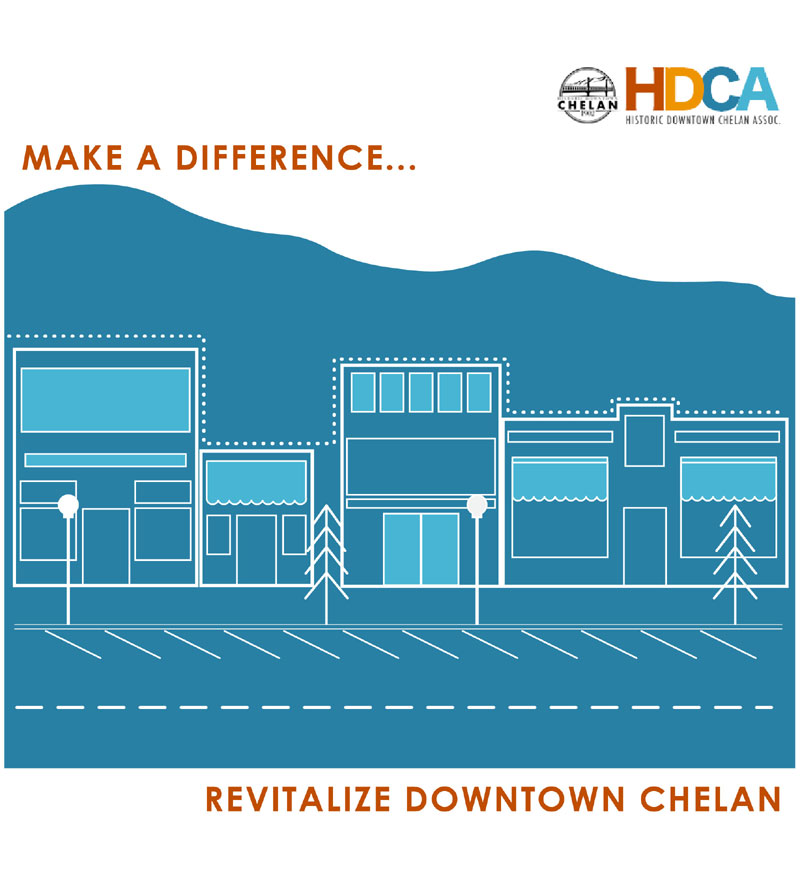 LAKE CHELAN, WA (January 13, 2021) — Chelan’s downtown core is due for some updates. The Historic Chelan Downtown Association wants to improve the experience for residents, visitors, and businesses; and is looking to the community to help provide direction. Have your voice heard by filling out a short survey either online at www.historicchelan.org or by scanning the QR code with your phone.

Community input from this survey will guide long-term improvement projects and shape the future of the city’s core, while being mindful of current hardships. This effort is designed to enhance the downtown experience for all, improve function, and sustain local economic vitality.