On 03/07/16 at 7:10 PM Douglas County Deputies received a report of a domestic disturbance on Riverside Place near Rock Island.  Witnesses at the residence reported that one of the involved parties, 42 year old Andrew J. Vincent of Rock Island, had left the residence and drove his vehicle into the Columbia River, which was only about 50 yards from the residence.

When Deputies arrived they discovered fresh vehicle tracks leading from the residence and over the river embankment.  There was no sign of the vehicle or Vincent.  Deputies and firefighters from Douglas and Chelan county searched the riverbank on foot with thermal imagers (which detect heat) and with the Douglas County Sheriff’s Office patrol boat equipped with side scan sonar.  Neither the vehicle nor Vincent could be found.

The Columbia Basin Search and Rescue Dive Team was contacted and agreed to come to Douglas County to help with the search.  On 03/09/16 at approximately 8:00 AM divers and support personnel arrived and began to search.  At 2:00 PM they located the vehicle in 40 feet of water.  Vincent was inside.  A large tow truck arrived and was able to pull the vehicle and decedent from the water.  Investigators determined there was no indication of foul play.  It is believed the vehicle went in to the river either by driver error or that it was an intentional act.  No autopsy was ordered.

This was an emotionally difficult time for the family and friends of the deceased.  I am extremely proud and grateful to all the EMS workers who helped bring closure for them.  I am particularly thankful the Columbia Basin Dive Team, all volunteers, who braved the deep water and swift current to complete this recovery. 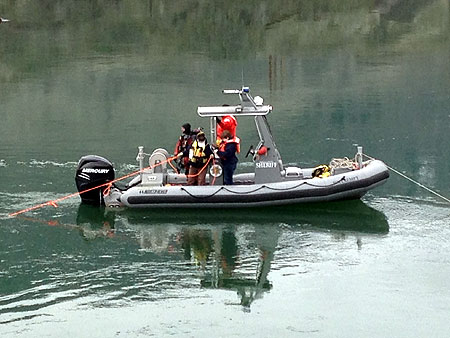 Comments are now closed for this entry