OLYMPIA – Tolling topics and plans for a Road Usage Charge pilot project are on the agenda for the State Transportation Commission’s meeting next week in Olympia. The commission also plans to name a section of State Route 507 in honor of an Iraqi war veteran who died in action.

The meeting starts at 8:30 a.m. both Tuesday, Oct. 17, and Wednesday, Oct. 18, at the Transportation Building, 310 Maple Park Ave. SE, on the Capitol Campus in Olympia. This meeting is open to the public and persons wishing to speak to the commission may do so during public comment periods at 11:45 a.m. Tuesday and 11:30 a.m. Wednesday.

On Tuesday morning, the commission will hear a progress report for the Road Usage Charge pilot project that will launch early in 2018. A road usage charge is a per-mile charge drivers would pay for the use of the roads. It is under consideration as a potential replacement for the gas tax drivers now pay on a gallon of gasoline. In light of growing fuel efficiency of new vehicles, which consume less gas and therefor raise less revenue, it would provide a more sustainable funding source for investments in transportation infrastructure. The pilot project will engage 2,000 volunteers from across the state to test the concept and shape how it might work.

With detailed planning for the pilot project operations well underway, the commission will learn more about current public attitudes toward road usage charging, and progress with volunteer recruitment. Additional discussions will focus on reporting options, activities of other partners in the pilot project, and the draft evaluation plan.

Other briefings on Tuesday include transportation recommendations from the Resilient Washington subcabinet, a proposal to accommodate autonomous vehicles on Interstate 5, and transit agency perspectives on tolling.

In addition, the commission will take action on a proposal initiated by the city of Rainier to name the portion of SR 507 within the community for Sgt. Justin D. Norton. A graduate of Rainier High School, Sgt. Norton was killed in action in 2006 while on patrol in Baghdad.

On Wednesday morning, the Washington State Department of Transportation’s Toll Division will report on FY 2017 traffic and revenue for each tolled facility, as well as progress toward meeting legislative benchmarks for toll operations and efficiency.

The meeting will conclude with an update by a commission workgroup formed to assess options for providing long-term, toll-payer relief for the Tacoma Narrows Bridge. The legislature has asked that the commission deliver its prioritized policy solutions to the legislature by December 2017.

For more information about the commission and a complete meeting agenda, visit: www.wstc.wa.gov/

On 10/08/17 at approximately 1:50 AM a Douglas County Deputy was on routine patrol near the intersection of Sunset Hwy. and Hwy. 2 when he observed a silver 2009 Ford Taurus traveling at a very high rate of speed.

He caught up with the vehicle on the Eastmont extension and paced it at 75 mph in a 40 mph zone.  The Deputy gave chase with his emergency equipment on and followed the vehicle up a dead end road.  The suspect vehicle turned around to come back the way he came and nearly hit the Deputy.  The suspect turned from Eastmont onto Baker and collided with a guard rail.

The Deputy saw multiple suspects exit the vehicle, jump the guard rail, and flee on foot.  One juvenile male suspect was found hiding in some bushes near a private residence.  He was arrested without incident and booked at the Chelan County Juvenile Detention Center.

Vehicle was found to have been stolen from Entiat several hours earlier.  At approximately 1:00 PM the driver of the stolen vehicle turned himself in at the Douglas County Sheriff’s Office.  He was also booked at the Chelan County Juvenile Detention Center.

The driver was a 16 year old male.  There were three passengers: a 14 year old male and two 15 year old males.  All were from East Wenatchee.  The case is still under investigation.

On 10/03/17 at approximately 9:58 AM Douglas County Deputies responded to a report of an injury accident which had occurred at a residence in the 2800 Blk. of NW Empire near East Wenatchee. The accident involved a pickup and a 19 month old child.

Investigation revealed that the father of the boy was parked in his pickup in the driveway of the residence while the mother was loading boxes into another vehicle.   Unbeknownst to either parent, their 19 month old child had gotten out of the house. As the father started to back out, the child ran behind the pickup and was run over. The parents drove the boy to Confluence Health Hospital where he succumbed to his injuries.

There is no evidence the incident was nothing more than a very tragic accident.

The Douglas County Sheriff’s Offices offers its deepest condolences to the child’s family and their friends.

On October 3, 2017 Sheriff Brian Burnett reports both suspects from the September 27th Dryden shooting incident are in custody.

On Wednesday, September 27 shortly before 2:00pm Chelan County Sheriff’s Deputies responded to a reported disturbance on Josephine Avenue, Dryden. The reporting party stated someone was beaten with a bat and then shot in the leg. The victim and witness described the two suspects as Michael Hernandez a 34 year old East Wenatchee resident and Modesto Gonzalez a 42 year old Wenatchee resident. Both suspects were described as leaving in a white passenger vehicle prior to Law Enforcement arrival.

On Sunday, October 1 Chelan County Deputies, through proactive investigation, learned of a possible location for Michael Hernandez. Deputies performed surveillance on a Palisades residence and were able to positively identify Hernandez. Deputies waited for Hernandez to leave in a vehicle at which time they performed a high risk stop on the vehicle and took Hernandez into custody without incident. That vehicle was also seized in preparation for a search warrant. The results from that warrant are still pending.

On Tuesday, October 3, again through proactive investigation, Chelan County Deputies learned of a possible location for Modesto Gonzalez. Deputies performed surveillance on an East Wenatchee residence and observed Gonzalez leave the location in a vehicle. Deputies performed a second high risk traffic stop on the vehicle and successfully took Gonzalez into custody without incident.

Both Hernandez and Gonzalez have been booked into Chelan County Regional Justice Center for the following crimes: 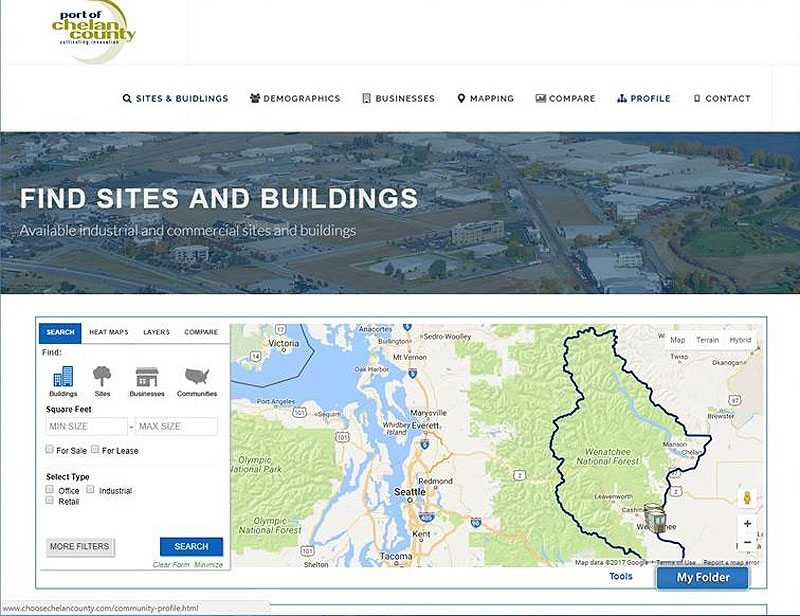 Over 97% of site selection screening is done online. ChooseChelanCounty.com provides immediate access to critical business intelligence that decision makers use to make investment decisions. The information provided goes beyond available sites and buildings and includes layers of data from educational attainment, consumer expenditures by category, to labor force.

Companies searching for a site can set their criteria such as minimum lot size, building ceiling height, price and other criteria to find a list of available real estate in Chelan County, increasing the opportunity to locate new or expanding businesses within the county.

According to Commission President Donn Etherington, “ChooseChelanCounty.com gathers economic, planning, infrastructure, geographic, and demographic information often sought by businesses looking to relocate or expand into a consolidated, user-friendly business portal. It allows users, including the Port of Chelan County, to find available properties with the data that supports locating in Chelan County.”

To add your Commercial or Industrial property to the system at no cost or get more information on ChooseChelanCounty.com, contact Craig Larsen, Business Development Director for the Port of Chelan County (This email address is being protected from spambots. You need JavaScript enabled to view it.).

Support has come from over 100 pledgers and supporters from all four counties in north central Washington, as well as several compnies in central California. The fundraising target was “topped off” with a $43,000 pledge from Microsoft, which operates a data center located in Quincy, Washington. “We very much appreciate Microsoft’s support for this regional economic development project. Microsoft is making a huge investment in Quincy and now a huge investment into our region,” continued Etherington.

The Air Service Investment Program shares the financial risk of new service with the airline and demonstrates the region’s intent to use the new service. An airline will invest about $8 million to start daily jet service over a two-year period. “Airlines that see broad support are willing to invest in new air service,” stated Trent Moyers, Director of Pangborn Memorial Airport.

Destination San Francisco is one in many steps to gain new air service at Pangborn Memorial Airport. “The Ports of Chelan County and Douglas County have been working toward new air service for many years. Critical was the completion of the Runway Extension Project. Service to San Francisco Bay area will improve the vitailty of our economic region for business and leisure travel alike,” stated Commissioner JC Baldwin. “This is a great opportunity for our region and we’re thrilled that so many businesses, organizations and individuals have pledged their financial support.”

On 09/24/17 at approximately 3:30 AM Douglas County Deputies were called to Three Rivers Hospital in Brewster because a male had been admitted with a knife wound.

Investigators believe a fight had occurred at a residence in the 800 Blk. of Fairview in Bridgeport.  During the altercation, the male, 21 year old Victor A. Valdovinos-Vazquez, was stabbed.

A search warrant was obtained for the residence where the suspect was believed to be hiding.  The Douglas County Sheriff’s Office Special Response Team attempted to call the suspect out, but there was no response from inside.

Tear gas was deployed inside, but when the team made entry, the suspect was gone.

Valdovinos was flown to Confluence Hospital with a stab wound to his abdomen.  His condition is unknown.

The Manson School District will hold an informational meeting on Thursday, September 28 at Manson High School beginning at 4pm.

There will be a question and answer session at the end of the presentation.

This meeting is open to the public.

As the poster below indicates, this year's Harvest Fest Raffle will bigger and better than ever thanks to the generosity of a number of people!

Tickets can be purchased Saturday, October 7 at the Orchard, or beforehand from Herb, if you can catch him! 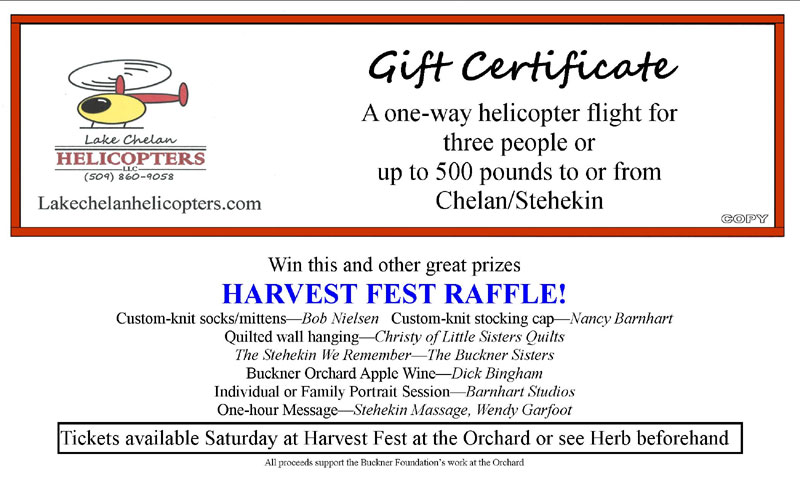