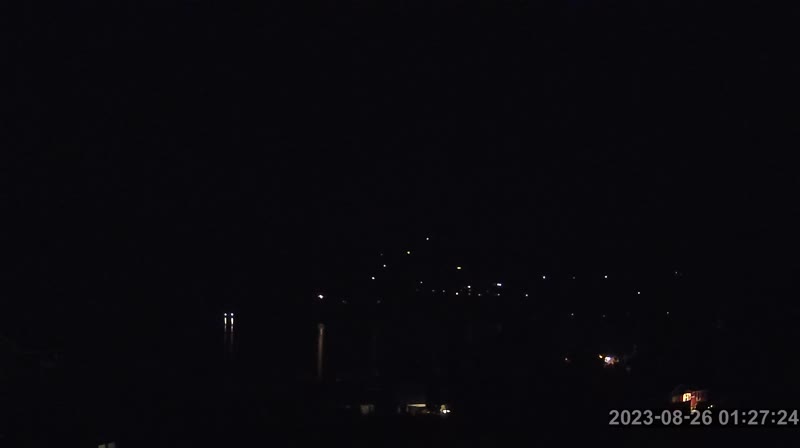 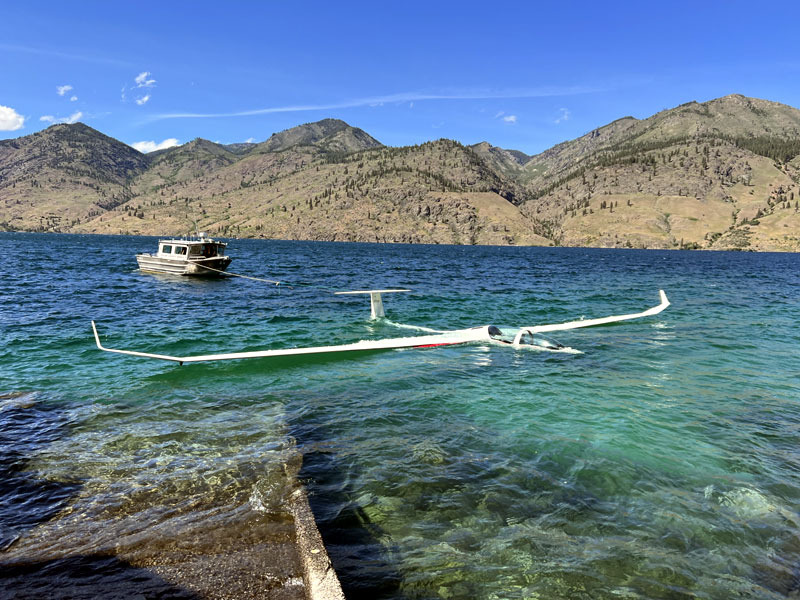 At 3:39 this afternoon, Chelan Fire and Rescue, Lake Chelan EMS, and Chelan County Sheriffs responded to a report of a glider plane crash approximately 200 yds off shore from the 25 Mile Creek State Park area.

Chelan County Sheriffs Marine 1 with Chelan EMS Medics and Chelan Fire and Rescue’s Boat 71 with Rescue Swimmers responded on the water while other resources drove to the 25 Mile Creek State Park.

Upon arrival, one of the reporting parties stated that the glider and patient had just been towed to a house up lake.

The pilot of the glider had left the Methow Valley area when he lost air flying over Lake Chelan. The glider had a hard landing on the water and the pilot was able to free himself from the cockpit.

A quick-thinking witness jumped into his canoe and was able to paddle out to the pilot who was sitting on top of the cockpit in choppy water safely rescuing him.

The pilot suffered no injuries but was extremely cold due to the still frigid water temperatures.

The glider was towed to the State Park where it will be broken down for transport and removal from the water.

Chelan Fire and Rescue would like to commend the quick actions of the witnesses in getting the pilot safely to the shore. 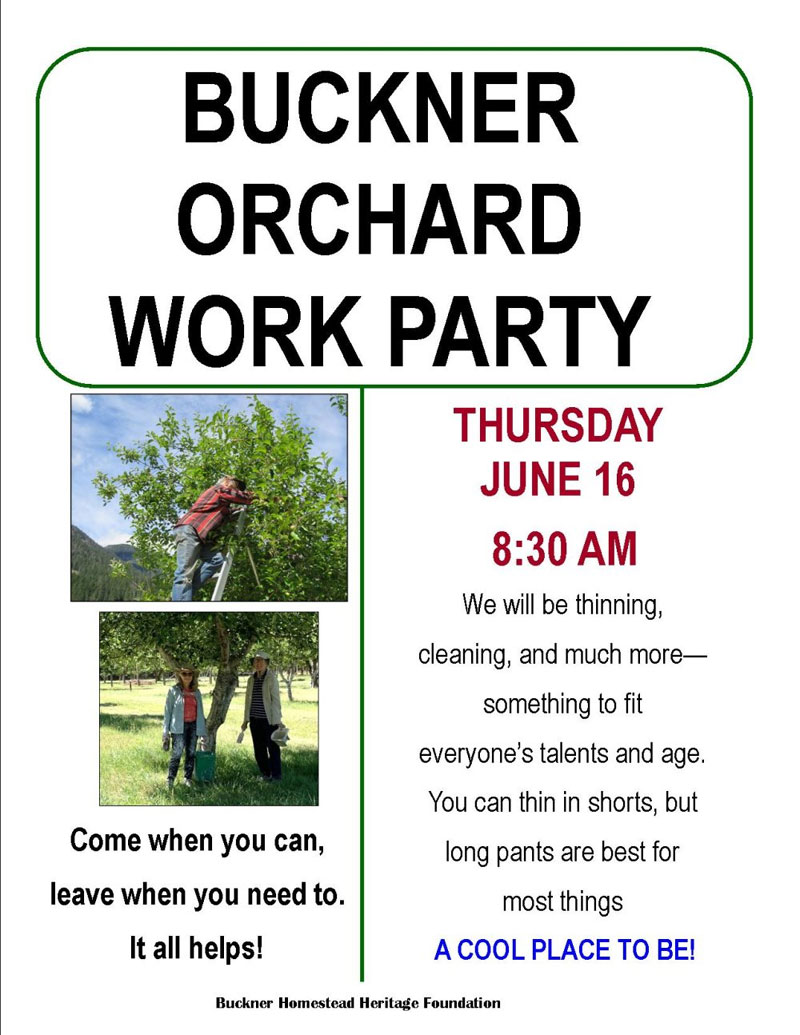 Near drowning at Old Chelan Bridge

Initial dispatch reported two individuals in the water, one of which made it to shore and the other was reported missing.

One Rescue Swimmer entered the water retrieving the male subject bringing him to shore.

One patient was transported by Chelan EMS and one patient went POV. Both patients were treated for a near drowning event.

The Manson School District Board of Directors is moving their regular scheduled of June 20, 2022 meeting to June 21, 2022 at 6:00 p.m. at the Manson Elementary School Library.

The March 2022 edition of WSDOT’s quarterly performance report (Gray Notebook 85) is now available online. While numerous performance measures are reported throughout the Gray Notebook, highlights from this issue include:

The meeting will be held in person at Manson Parks’ Bumgarner Meeting Room, and via Zoom.  The meeting information is as follows:

Dial by your location

The North Central Washington Special Investigation Unit (NCW SIU) was activated On June 4th, 2022 at the request of the Wenatchee Police Department.  The Unit responded to the 200 Block of South Western Avenue in Wenatchee, Washington to investigate an Officer Involved Shooting.  Wenatchee Police department was the involved agency in the shooting.

At approximately 3:45 pm Wenatchee Police Officers responded to the 400 block of Castle View Place in Wenatchee for a burglary in progress.  The subject fled on foot prior to the Officer’s arrival.  A subject matching the description was reported in the 200 block of South Western soon after.  Officers made contact with the subject, ultimately resulting in the application of deadly force.  Medical aid was performed by officers but the subject was pronounced dead at the scene.

During the early stages of the investigation, it was determined a male subject was armed with a knife when officers contacted him. Two different less lethal options were deployed prior to the application of deadly force.

To help further the investigation, the SIU is requesting citizens who have video of the incident or events that led up to it contact investigators through the Chelan County Sheriff’s Office Detectives Tip Line. The tip line is at 509-667-6845. Please leave a message and an NCW SIU investigator will contact you.

The name of the subject will be withheld until next of kin can be notified.

OLYMPIA – Every year, more than 12 million pounds of litter ends up on Washington’s roadways and up to 40% - almost 5 million pounds - comes from unsecured cargo blowing out of trucks and cars. This debris isn’t just unsightly, it’s dangerous to motorists, people who walk, bike or roll, and roadside workers. To recognize this, Washington is marking National Secure Your Load Day on June 6, which commemorates people whose lives were impacted or taken by unsecured loads and encourages drivers to properly secure their loads every time they drive.

“Washington is the most beautiful state in the country, and to keep it that way we all have to do our part to keep litter and debris off our public spaces,” said Washington Gov. Jay Inslee. “Unsecured loads are a threat to our safety and to the health of our fellow Washingtonians. We’re reminding every driver about the importance of securing their cargo and keeping Washington litter free.”

“Last year, debris on highways caused about 300 traffic crashes and 30 injuries in Washington. So far this year, we’ve also seen two known fatalities related to unsecured loads. This is devastating because these crashes were all preventable,” said Sgt. Darren Wright, a public information officer with the Washington State Patrol. “It’s so important to properly secure your load before driving. Anything that flies off a moving vehicle is dangerous, and can even be deadly. In order to save lives, every driver in Washington needs to secure their vehicle load every time they drive.”

As a part of the annual campaign, state troopers are conducting emphasis patrols across the state for three consecutive weekends, starting June 10 and ending June 26. Drivers can get pulled over and ticketed if their loads are not properly secured in accordance with state law. Fines for littering and unsecured loads range from $50 to $5,000. If an item falls out and causes bodily harm or property damage, the driver could also face jail time. The largest fines are for “lit debris” — primarily cigarettes — and items that can cause vehicle crashes.

Roadside litter is an expensive and unrelenting problem in Washington. The Washington State Department of Transportation and Department of Ecology together spend $8.5 million a year on efforts to clean the state’s roads and highways. Last year, Ecology-funded pickup programs spent more than 125,000 hours collecting nearly 5.2 million pounds of litter and cleaning nearly 22,000 miles of road. In just the first four months of 2022, WSDOT’s Adopt-a-Highway volunteers and maintenance crews have already found and removed 136 tons of litter and debris from roadways and rights of way.

“We’re proud of the work we’ve done with local government and state agencies to lessen the harmful environmental impacts of roadside litter, but the truth is that more litter is deposited every year than we can pick up,” said Amber Smith, statewide litter prevention coordinator at the Washington Department of Ecology. “Litter from unsecured vehicle loads affects every corner of Washington and can contain harmful chemicals or cause injuries to wildlife, as well as people. Please, help keep our roads safe, beautiful and litter free by making sure your cargo is properly secured before driving.”

Tarps, straps and cargo nets are easy and effective solutions for securing many types of vehicle loads and preventing road hazards. The Washington State Department of Ecology is piloting cargo net giveaway events in King, Thurston and Yakima counties in June. Up to 40 statewide retail hardware store partners will also share best practices and products to safely secure loads.

In addition to unsecured loads, the We Keep Washington Litter Free campaign focuses on additional littering behaviors in several sub-campaigns. Statewide advertising for the 2022 Secure Your Load for Safer Roads campaign runs through June.

The public can lend a hand cleaning up roadside litter through WSDOT’s Adopt-a-Highway volunteer program. Anyone interested in joining can learn more on the Adopt-a-Highway program webpage.

We have 279 guests and no members online