The Chelan County Sheriff’s Office is releasing the name of the rock climber killed during a fall on Saturday afternoon in the Icicle River drainage area west of Leavenworth. Zulfiya Dokukina (50 years old) of SeaTac was climbing the “Bob’s Crack” route of the “Bob’s Wall” rock climbing area at the time of the accident. Dokukina had completed one route on the wall, and was not secured to any type of rope or other safety device while transitioning to another route. There are no known eyewitnesses to the actual incident, so the exact cause of the fall remains undetermined at this time.

Sheriff Brian Burnett reports that on Saturday May 14th, 2016 at 2:52pm RIVERCOM dispatch was notified of a fallen climber in the vicinity of the “Bob’s Wall” rock climbing area in the Icicle River drainage west of Leavenworth, WA. It was determined a 50 year old female from Seatac, WA had fallen approximately 80 feet while climbing with others in the area.

Rescuers from the Chelan County Sheriff’s Office High Angle Rope Rescue Team (HARRT) and, Chelan County Mountain Rescue (CCMR) were training nearby and immediately responded to the accident scene. Cascade Medics and Chelan County Volunteer Search and Rescue also responded to assist. CPR was being performed on the fallen climber as responders arrived on scene. However, she did not survive her injuries. The exact cause of the fall is under investigation.

The Sheriff’s Office is withholding the name of the deceased pending next of kin notification.

Sheriff Brian Burnett reports that on Sunday May 8th at 10:25am RIVERCOM dispatch was advised of an injured climber on the Snow Creek Wall above the Icicle River drainage southwest of Leavenworth, WA. The climber had reportedly fallen and suffered a fractured right ankle while ascending the second pitch of the “Orbit” route. Two other climbers in the party were attempting to lower the injured subject to the base of the wall.

The Chelan County Sheriff’s Office High Angle Rope Rescue Team (HARRT) and Chelan County Mountain Rescue (CCMR) members responded to the incident along with Chelan County Search & Rescue. When responders arrived at the scene, the injured subject had been successfully lowered to the base of the Snow Creek Wall by his climbing partners. The HARRT team and CCMR members worked together to rig a rope and litter system to move the subject the remainder of the way down to the Snow Lakes Trail. SAR volunteers used a wheeled litter to transport the subject down to the trailhead by 6:51pm. This search & rescue mission took over 8 hours to complete due to the terrain and distance from the trailhead.

The injured subject, Andrei Maksimenka (41yoa) from Sammamish, WA was transported by Cascade Ambulance to Central Washington Hospital in Wenatchee for treatment.

The victim of yesterday’s accident in the Wenatchee River near Dryden has been identified as 53 year old Keith M. Thomas of Shelton. Mr. Thomas and a teenage girl were in a commercial raft operated by Orion River Rafting of Leavenworth when the accident occurred. An autopsy has been scheduled.

Sheriff Brian Burnett reports a fatality this afternoon on the Wenatchee River near Dryden.

A commercial raft occupied by an adult male in his 50’s, a teenage girl, and the operator flipped over near Dryden at approximately 2:00 p.m. Both the male and female were ejected from the raft.

The female was able to climb back into the raft the male was not. A safety kayaker accompanying the raft attempted to assist the male to shore. Rescuer’s performed CPR on the male for over 30 minutes but were unable to revive him.

Both the male and female were wearing wet suits and personal flotation devices.

Rock blasting to close Snoqualmie Pass for an hour Thursday

Written by Janalyn Brincat
Published: 03 May 2016

Sheriff Brian Burnett reports on Saturday April 30th, shortly after 7:30 pm, Chelan County Deputies responded to a Wenatchee area home for a reported shooting. The reporting party said she and her brother were in the backyard at a neighboring house and her brother was struck in the face with debris from the gunshot. She also described several people fleeing a neighboring residence in a passenger vehicle.

Upon arrival Deputies located two victims at the neighboring residence. The two victims, both adult males, were attending a party and were sitting in the backyard when both were struck by pellets from a shotgun. One victim was taken to Central Washington Hospital where he was treated and released for pellet wounds to his face. The second victim was not transported and received a minor injury to his arm from being struck by shotgun pellets.

Deputies contacted another neighbor who stated she was the caretaker of the abandoned residence. She attempted to remove some people who were no longer meeting their rental agreement requirements. There was an argument over property left inside the residence, and the caretaker stated one of the subjects broke into the abandoned residence, so she went to confront them with a shotgun. While inside the residence, she stated one of the subjects made an aggressive move towards her, so she fired one round from the shotgun. This was the one round that struck the two victims at the neighboring residence. The subjects the caretaker was talking to fled the scene prior to Deputies arrival and have not been located.

Chenoa Prather, a 33 year old female from Wenatchee, who identified herself as the caretaker, was booked into Chelan County Regional Justice Center for two counts of Reckless Endangerment for firing the one shotgun round and striking the unintended victims next door.

The investigation is ongoing and the Sheriff’s Office is attempting to locate the subject that fled.

Crews expect to open the highway in time for fishing season

WINTHROP – Crews expect to swing open the winter closure gates to State Route 20, the North Cascades Highway, at 11 a.m. Friday, April 22. That is a week earlier than predicted when the clearing work began on St. Patrick’s Day.

The mid-morning reopening allows the crew time to sweep the entire 37-mile winter closure zone for sand, rocks and debris, clear any snow from below avalanche chutes, and apply sand or deicer as needed.

By Wednesday the crews had cleared the last seven miles of highway separating at the end of week 4.  Warm temperatures sped the clearing and allowed for successful avalanche control to clear the chutes that still held snow so the highway can be safely opened.

“We all live up here and know it’s important for local businesses to have the highway open for the lowland fishing season and ‘49er Days Festival in Winthrop,” said Don Becker, WSDOT maintenance supervisor.

Last year it took crews only three weeks and it opened April 3. There was only one year, 1977, when the highway never closed, due to a drought.  The earliest opening was March 10, 2005.

For more information, including a history of opening and closing dates, maps, photos and progress reports on the 2016 opening, visit the North Cascades web page:

"Most Likely to Succeed" at Manson School April 28th 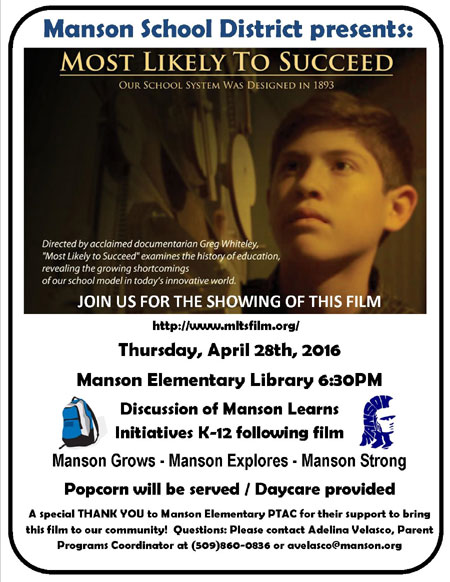 OLYMPIA –A request to increase speed limits on a roughly 100-mile stretch of Interstate 90 in eastern Washington is being considered and the Washington State Department of Transportation is asking for comments from interested citizens.

The proposed speed limit increase would be from the current 70 miles per hour to 75. The affected area is from the town of George, east to the western border of the Spokane County line.

A bill passed in the 2015 Legislature allows the Secretary of Transportation to increase the speed limit on any highway to a maximum 75 mph. Lawmakers in eastern Washington have asked Acting Secretary of Transportation Roger Millar to consider such an  increase on I-90. If an increase was approved, the limit would remain 60 mph for vehicles over 10,000 pounds or vehicles pulling trailers.

Since August, WSDOT has worked with the state Traffic Safety Commission and the Washington State Patrol to evaluate the I-90 request. The evaluation process included:

Two meetings are scheduled later this month to provide information about the speed limit increase request and to take public comments. Comments can also be provided online.

11:30 a.m., Wednesday, April 20 – as part of a presentation to the Washington Transportation Commission

Based on the results of the analysis, public comments and consultation with traffic safety partners, WSDOT will make a decision whether to raise the speed limit for this section of I-90. The decision is expected in May. If the limit is increased, it would become effective once new speed limit signs are posted.